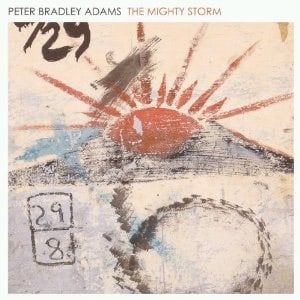 Singer/songwriter Peter Bradley Adams has been working on his new album for awhile now and The Mighty Storm is finally upon us. I believe fans will agree with me, that the wait was worth it!

I reviewed Peter Bradley Adams’ last album Between Us just at random. When it comes time to do reviews in the past, I’d grab a handful of CDs (when publicists still sent them) and then just started to review the music. My initial thoughts were, this isn’t bad and gave it a decent review. About 6 months later, I circled back around to it and thought, wow this is actually an amazing album. I ended up seeing him perform live and thought he and his band were excellent. I ended up getting the rest of the PBA discography and been a fan ever since.

The new album is on par with the rest of Peter’s solo albums. The title track “The Mighty Storm,” sounds a bit different than what he’s done in the past but it’s a good tune. I think the song would be pretty cool to hear in a movie trailer/commercial. “Here comes, the Mighty Storm…” “Hey Believers” and “Feather in Her Crown” are both songs that have that signature Peter Bradley Adams sound. A mixture of slow Folk/Americana with extremely soft vocals. One reason why Peter stands out from the plethora of singer/songwriters is because he sort of reminds me of Nick Drake. He’s not depressing or anything like that but just the way he sings.

One of the songs that stood out on his last album was “Be Still My Heart.” Peter re-did the song for this album, for whatever reason, and sounds even better! It starts off a lot faster this time. “When The Cold Comes” is nice and slow for the majority of the song, but then picks up during the chorus. Peter’s songs have many layers and every time you listen to them, you discover something else about it. I usually think to myself, oh I haven’t heard that instrument before in this song. It’s little things like that makes me love Peter’s music.

If soothing melodies and Americana/folk rock is your thing, you’ll appreciate The Mighty Storm by Peter Bradley Adams.