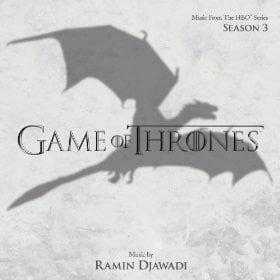 Game of Thrones season 3 has just ended, but while you wait for the long return of the show you can listen to Ramin Djawadi’s excellent score! The Season 3 score is available on digital download now but will be available on CD at the beginning of July.


All three scores for the series have been released and each one gets better and better. Season 3’s music was noticeably better from the start. I loved the first two but now that the themes have been established, Ramin can breathe a little and just have fun with the music. The theme (“Main Title”) is perhaps one of the most recognizable themes in the last 20 years in my opinion. How do I know this, just google it or go on YouTube at the amount of covers the theme has. Everyone knows it, everyone hums it. I don’t think a day goes by without me humming the theme song of Game of Thrones.

Another theme I have been singing since Season 2, is the “The Rains of Castamere” which is heavily featured this season for obvious reasons. It was done amazingly by the indie band The National but this time we get the score version (“A Lannister Always Pays His Debts”), which is equally amazing! Its perhaps my favorite (after the “Main Title”), and we hear a lot of it this season in episodes The Bear and Maiden Fair, and “The Rains of Castamere.” The first part is played at the Red Wedding, and the second part is played after Jaime and Brienne leave Harrenhal.

The first soundtrack was a bit quiet in spots, the second soundtrack was really good, and this one gets a lot better in all aspects. Each song is worthy of a listen. Not sure where this appears or not, but I love the choral version of the theme in “Dark Wings, Dark Words.” The theme is also heard again in the very last track “For The Realm,” which is an acoustic guitar version of the theme. I was wondering if we were going to hear that in the show but don’t think we did.

The score has its fair share of dramatic cues (“I Paid The Iron Price,” “You Know Nothing,”) and action cues (“Wall of Ice,” “Reek”). I remember watching Theon on the horse scene and noticed how good the music was and glad they put that on the soundtrack. There are some pieces that were heard on the show that weren’t include though.

Intense pieces to listen to include “White Walkers,” and “The Lannisters Send Their Regards.” The later is from the Red Wedding so you know you’re getting an extremely intense and gut-wrenching music to go along with what’s happening on the screen. “Mysha” is the scene in the season finale where Daenerys crowd-surfs her slaves she just freed. The scene was extremely cheesy but the music is actually really good and something we haven’t really heard yet.

This soundtrack features 2 songs that were played this season. The Hold Steady’s punky rendition of “The Bear and Maiden Fair” and young actress Kerry Ingram who plays Stannis’s sweet daughter sings “It’s Always Summer Under The Sea.” The Hold Steady’s song caused a lot of stur after Jaime lost something at the end of one of the episodes. People either loved it or hated it. I don’t mind the song on the soundtrack but didn’t think it fit in the show at all, even in the end credits. If anything, should have made it more folky/acoustic if they wanted to have it played over the end credits.

I’m really curious to see what Ramin Djawadi does with the music next season because he keeps stepping up his game with each season!