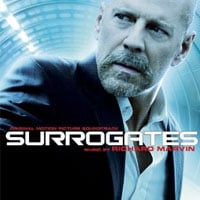 Surrogates stars Bruce Willis and is a sci-fi movie that came out in 2009. I still haven’t seen yet (even though its sitting on my DVD shelf). I’ll watch it eventually; the movie didn’t really get good reviews though. The movie revolves around a college student murder linked to the man who helped create a high-tech surrogate phenomenon that allows people to purchase un-flawed robotic versions of themselves. All righty.


Richard Marvin’s score is action-packed and suspenseful, just what I like in a sci-fi score. I’m not really familiar with Marvin’s work all that much besides U-571 but I see that he has done a lot of TV work (The O.C, Six Feet Under, In Treatment). I was impressed with this score but I was expecting to completely dislike it for some reason. Sure, there are parts of the score that are too quiet & subtle for me but I really dig the action cues. The score has a similar tone to The Dark Knight. Certain tracks have repetitive strings happening, along with ominous sci-fi sounds that result in some nice tracks! I think once I see the movie, I’ll enjoy this score even more.