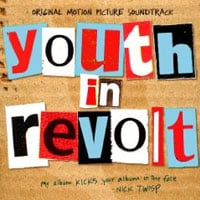 I used to like Michael Cera’s movies but lately I’m just sick of his characters. They end up being all the same; awkward dorky high school kids wearing a hoody and that listens to indie rock. The guy is 21 now; don’t you think he should be playing someone who isn’t 16 anymore? Youth In Revolt is about a young outcast who likes this girl. But she doesn’t like him back so he creates an alter-ego that’s the complete opposite of him. Girls like bad boys right? His alter-ego makes him a wanted criminal, and everything just gets out of hand.

Even though I make fun of Michael Cera’s roles, his movies still have good soundtracks. Well that is if you’re into indie rock music. I haven’t really heard of these bands too much but I like what I hear. I’ve heard of Eric Johnson of the Fruit Bats, because he’s in The Shins now. I think I might have to look into Fruit Bats’ CDs because I like their indie folk sound. Their track “When You Love Somebody” opens up the album. The soundtrack has an eclectic mixture of indie style bands, as well as some others that don’t fit that genre per say. Some of the non-Indie bands/tracks include Fat Lip, Fun Boy Three, Bananarama, and Jo Stafford.

The soundtrack is very good and one I see myself listening to a lot. Maybe Youth In Revolt will be a decent comedy movie and offer up something different. But of course I have my doubts. If I’m entertained, then I guess there’s nothing wrong with that then.

Bananarama is Back and Announce North America Tour Dates