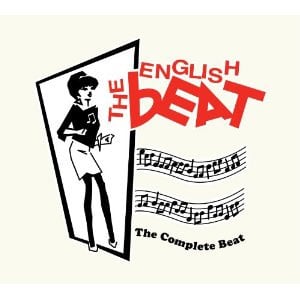 The English Beat have been around for over 30 years and Dave Wakeling is still at it with relentless touring. Shout! Factory has compiled practically every song the UK 2 tone band has done and released a 5 CD box set. So you might be asking yourself, what’s in the box set? Well Mr. impatient, you get 3 studio releases (I Just Can’t Stop It, Wha’ppen, Special Beat Service), 12” & Dub versions, and finally a “Peel Sessions / Live in Boston” disc. Plus did I mention everything is remastered?


The first disc is I Just Can’t Stop It, which is only fitting since it’s their debut album. The album contains the brilliant Beat songs “Mirror in the Bathroom,” “Two Swords,” “Hands Off She’s Mine,” “Ranking Full Stop” and “Best Friend.” That album also has some great covers of “Tears of a Clown,” “Whine & Grine,” “Can’t Get Used To Losing You.” It’s just a practically flawless ska/reggae album.

The second disc is Wha’ppen and that one has always been my least favorite out of the English Beat albums. It has some amazing tunes on it but isn’t as consistent as I Just Can’t Stop It or Special Beat Service. The songs I love from this album include “Too Nice To Talk To,” “Doors of your Heart,” “Walk Away” and “Hit It.” “Too Nice To Talk To” is probably one of the first songs I’ve heard from The Beat and hooked me in. I remember playing that song at high school library and someone who isn’t into ska at all thought it was a cool song. It just goes to show you the reach the band had on people. I’m not saying Wha’ppen is a bad album or anything, but it’s just personal preference basically. It has some of my favorites from the band on that album. There are bonus tracks on this album which are “Psychedelic Rockers” and “Which Side of the Bed.”

Special Beat Service is the third disc and this is probably my favorite album from The English Beat. I love just about every song on here. That album opens with “I Confess” and I’ll admit I wasn’t a fan of that song until recently. I don’t know why, I just never got into the song until I started seeing Dave Wakeling play that song live. Now I love the song, go figure. I guess my older,wiser self can appreciate the song now. From this album, my favorites include “Jeanette,” “Sole Salvation,” “Rotating Heads (Where’s Ferris Bueller?)” “She’s Going,” “Sugar and Stress” and of course the obvious “Save It For Later.” But I also like “Pato and Roger A Go Talk” and “Ackee 123” for their Caribbean flavor. Out of the 3 main albums, this one has the most bonus tracks. They include “What’s Your Best Thing,” “March of the Swivelheads,” “Cool Entertainers,” and “A Go Talk.” Most of those are just remixes of the originals that appear earlier on in the album.

If you like dubbed out and extended tracks, you’ll love disc 4! There are 15 tracks in total on this disc and for the most part are extended tracks. I’m not really a fan of the dub stuff too much. There are a few extended tracks that I enjoyed like “Too Nice To Talk To,” “Doors of Your Heart,” “Save It For Later,” and “Jeanette.” Disc 5 is a bunch of John Peel Sessions which are awesome and cool to hear the band do the songs slightly different. Some of the songs are sped up a little bit. There’s only a few songs that are Live From Boston. Those are “Best Friend,” “Tears of a Clown,” “Twist and Crawl” and “Get A Job.” The Peel Sessions and the live tracks are all amazing quality.

Don’t own The Beat’s music? Well skank your ass over to a record store if they still exist or buy it online then! This set is totally worth buying! Better yet, buy it at one of English Beat’s shows and that money will directly go to the band.

Bottom Line: An amazing boxset that’s worth every penny!
Notable Tracks: Mirror in the Bathroom, Two Swords, Too Nice To Talk To, Best Friend, Doors of your Heart, Walk Away, Sole Salvation, Save It For Later
Overall Rating: