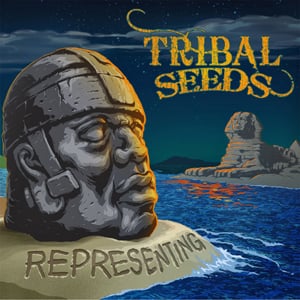 “Representing” represents Tribal Seeds fourth full length album. It also happens to be the first album of the bands that I have had the pleasure of listening to.

Described as a reggae roots/reggae rock band I would definitely put the meter way down onto the roots side than I would the rock side. Unlike popular reggae rock bands like Ballyhoo! and Pepper, Tribal seeds takes that early reggae sounds of the Wailers and Toots Hibbert and adds a modern flair to it. There is a smooth and steady sound from start to finish on “Representing”. There really aren’t any rock influenced reggae songs on the album…it’s all reggae all the time…which is fine by me. Nowadays bands that are lumped into the reggae rock genre tend to go in the opposite direction and produce pop rock songs or dance club numbers that may or may not have a reggae influence at all.

In regards to the songs found on “Representing”, there are quite a few standout tracks in my mind. The title track is reminiscent of a Ziggy Marley sound with a world music vibe to it, “In Your Area” features Slightly Stoopid’s Kyle McDonald and has that definitive Slightly Stoopid sound that can only be compared to the best of Stoopid’s reggae tracks and, my favorite track on the album, “Ruined” has the smoothest and most harmonious sound on the album with its simple yet powerful traditional reggae sound.

With summertime soon to kick into high gear “Representing” is set to be the soundtrack to many a summer house party. Everything about this album is positive and uplifting so…kick back, flip off your sandals and sip down an ice cold cup of your drink of choice. This album is what that bliss sounds like.

Bottom Line: An excellent reggae album that digs deep into the traditional reggae roots instead of opting for the cheap dance club hit or the reggae-tinged pop rock single.
Notable Tracks: Representing, In Your Area, Ruined, Night and Day, Don’t Wait
Overall Rating: