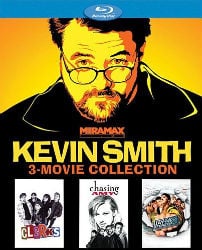 New Jersey native, Kevin Smith started out in the world of film making with a successful indie film Clerks, that became a cult classic, and has gone onto direct several bigger films to date. Smith always the outspoken writer-director, and never shy of controversy also released Chasing Amy, a unconventional love story between a heterosexual male and a lesbian. Finally rounding out the collection is Jay & Silent Bob Strike Back, a very funny film featuring everyone’s favorite characters from the Kevin Smith films, the title characters. While not a true “box set” to the Kevin Smith collection, this set features some of the films from Miramax, yet to be released on Blu Ray.

Clerks, Kevin Smith’s first film was impressively made for only $27,000 amassing a ton of credit card debt in hopes of selling the film to a studio, and still is perceived as one of Kevin’s best films. It helped established Smith as a Director and Writer for the film industry. For the first time in a long time, here was a writer/director who relied on a screenplay heavy with dialogue and some straight forward characters and some not so straight forward. Clerks is about a guy, Dante, who works at a convenience store in New Jersey and his friend Randall working next door at a video store. It details how Dante just not supposed to be there today, and is forced to work because someone didn’t show up for their shift. Clerks was meant to show how guys hang out and what they talk about. There wasn’t a big message to get across, or make you feel warm and cozy. Dante as a character always annoyed me. Randall was the best part of Clerks and still watching it 15 years later, he still is the funniest character in the film.

Kevin Smith’s 2nd film was Mallrats which was made with Universal for a hell of a lot more than what they made Clerks with. The film was not successful, except with cult fans of Kevin Smith’s work. Critics disliked it, and even some fans of the first film wondered what happened. As the struggles of dealing with a box office disappointment mounted, Smith was working on Chasing Amy. Made for little money yet again because Smith had yet proven himself at the Box Office, he had to hire some friends in the roles for this unconventional love story, starring Ben Affleck in his first starring role and Joey Lauren Adams, with Jason Lee. The story in a round about way was a love triangle, between two heterosexuals and a lesbian. Holden (Affleck) falls for Amy (Adams), while Banky’s (Lee) friendship leads to jealously and ruins their “bro-mance.”

The final film in the collection is Jay & Silent Bob Strike Back. Primarily starring Kevin himself and his buddy Jason Mewes as “Jay.” A slew of great cameos make up this film which Jay and Silent Bob realize their alter egos from “Chasing Amy,” Blunt Man and Chronic are being sold as a movie out in Hollywood. They must race to stop the film being made and while not smart, they don’t care about the money they will be making from their identities being used. As of this point in Smith’s career, he hasn’t made a film as light hearted as this one, with fun and campy action, and slapstick comedy.

A slew of new extras are part of this box set including new Introductions by Kevin Smith, new making of documentaries for Chasing Amy and Jay and Silent Bob Strike Back. The Blu Ray set features the original extras like the deleted scenes, outtakes, trailers, and audio commentaries except Chasing Amy where fans get a brand new audio commentary by Smith and Producer Scott Mosier. Other Chasing Amy new extras included a Conversation with Kevin and Joey, in which they discuss how their relationship helped lead the way to Chasing Amy and how that was created. I found the making of Chasing Amy very fascinating. I was completely unaware of all the trials and tribulations to make this film and what the consequences of Mallrats failure was. The romantic relationship between Kevin Smith and Joey Lauren Adams was unknown to most and was the inspiration for Smith writing the script and dating Joey during filming. If you have to watch one extra on this box set, I recommend the Chasing Amy documentary. It shows the struggles of that next movie after one success and one failure and it really tests the filmmakers and actors involved. What’s also really great is seeing this documentary in high definition.

The films still hold up to this day, for Clerks 15 years ago, and even the others. While Clerks has some things that annoy me, I still find it a funny, indie film with interesting characters. Same goes for Chasing Amy. A compelling romantic story that is complicated and features some excellent acting by Affleck and Adams. Jay & Silent Bob features some very funny cameos from Will Ferrell, Mark Hammill, and Ben Affleck and Matt Damon to name a few. The entire film is like one big cameo from Hollywood’s finest. All the films look excellent on Blu Ray, with perhaps the exception Clerks since it was made very low budget and the film grain is part of the film for an aesthetic view, it can be sometimes distracting in High definition. All the films feature audio tracks that are smooth, and clear without any noise. Not a bad start to a collection with what will be a long career for Kevin Smith

Creature’s Corner: The Inside Scoop on Upcoming Marvel/DC Movies