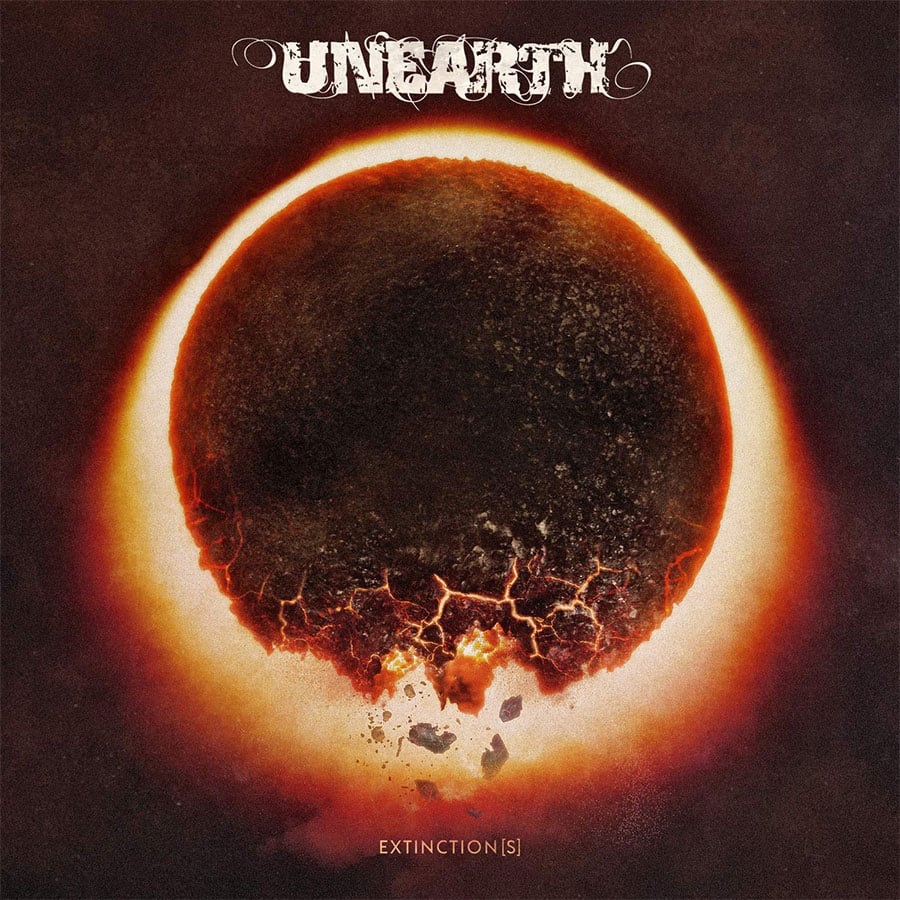 Unearth returns with the follow up to their 2014 release Watchers of Rule with their 7th album Extinction(s). There’s a lot to be said about the state of Metalcore nowadays, some bands are back doing 10 year anniversary tours, some bands have become weekend warriors, playing shows here and there, releasing an album. For most parts, once the nostalgia bubble bursts, they’re back to “where are they now” territory. While taking some breaks here and there, Unearth have remained pretty consistent. Despite years of rotating drummers and fill in bass players, it certainly hasn’t been the easiest of roads. But in all, the band has stayed true on their path, delivering breakdowns mixed with fantastic guitar work, and this album is no different.


Opting for a different approach, the band employed Daniel “DL” Laskiewicz, formerly of the Acacia Strain, to help co write some of the riffs for Extinction(s). While his presence on certain can be felt on many tracks, it’s not as if these weren’t things Unearth hadn’t already been doing throughout their entire career. Outside writers seem to be a reoccurring theme in modern metal as Animals as Leaders, Jasta and others seem to be adopting this approach. If anything DL helped them become a more focused riff unit, which is heavily displayed on the opener “Incinerate” even with outside writing, you’re still getting the classic Unearth fans have grown to love. Unfortunately as strong as the album’s instrumentation and arranging is, it’s plagued with the same issues lyrically that former Unearth albums have. Most lyrics here seem like strung together cliché phrases bunched together to flesh out songs that most fans have stopped trying to figure out what Trevor is trying to convey. In fact the randomly placed lyric “E Pluribus Unum” triggers an eye roll every time it plays. But all is not lost, fans have come to expect great riffs and breakdowns and that’s what they get.

There are some newer injections into the sound in songs like “The Hunt Begins” which goes from a Killswitch Engage intro to full on meaty bends ala Pantera during the verse. Those bends continue into the Slipknot feel of “Hard Lined Downfall,” which I’m sure some input was given from DL as it is one of the numerous moments on the record that also has an Acacia Strain like feel to it’s frenzied pacing. “King of the Arctic” slowly creeps into one giant breakdown of a song with break for a really cool guitar solo and then finishing with that hard chugging breakdown. DL’s Acacia Strain like Meshuggah worship comes back into play, as this song is basically full on Acacia Strain minus the Vincent Bennett vocals. If you were looking for something similar to their early hit “Zombie Autopilot”, “No Reprisal” is where the album hits peak shred and the most melodic part of the record, with a pretty heavy mid section; before closing out melodically. The album ends as epically as it can get, with a fury of pull offs fading out with great melodic riffs with somewhat of an orchestral accompaniment.

As the album ends, one can’t help but feel even with the addition of DL’s co-writing on the album; it’s missing that next step to cement them beyond just being that band that plays guitar solos and breakdowns. This style that got many bands over in 2004 does sound a bit formulaic in good and bad ways here. The band could’ve have used this as an attempt to bridge out and make something more complex and epic like having a Master of Puppets; but instead tends to play it safe using the Slayer formula; staying confined to the style that got them this far. Overall, the album does have a great feel and plays a bit more refreshing than previous albums; but even with minor tweaks to the identity, this may not be one of those albums that stand out 10 years later from the rest of their discography.

Notable Tracks: Incinerate, One with the Sun, Survivalist
Overall Rating: