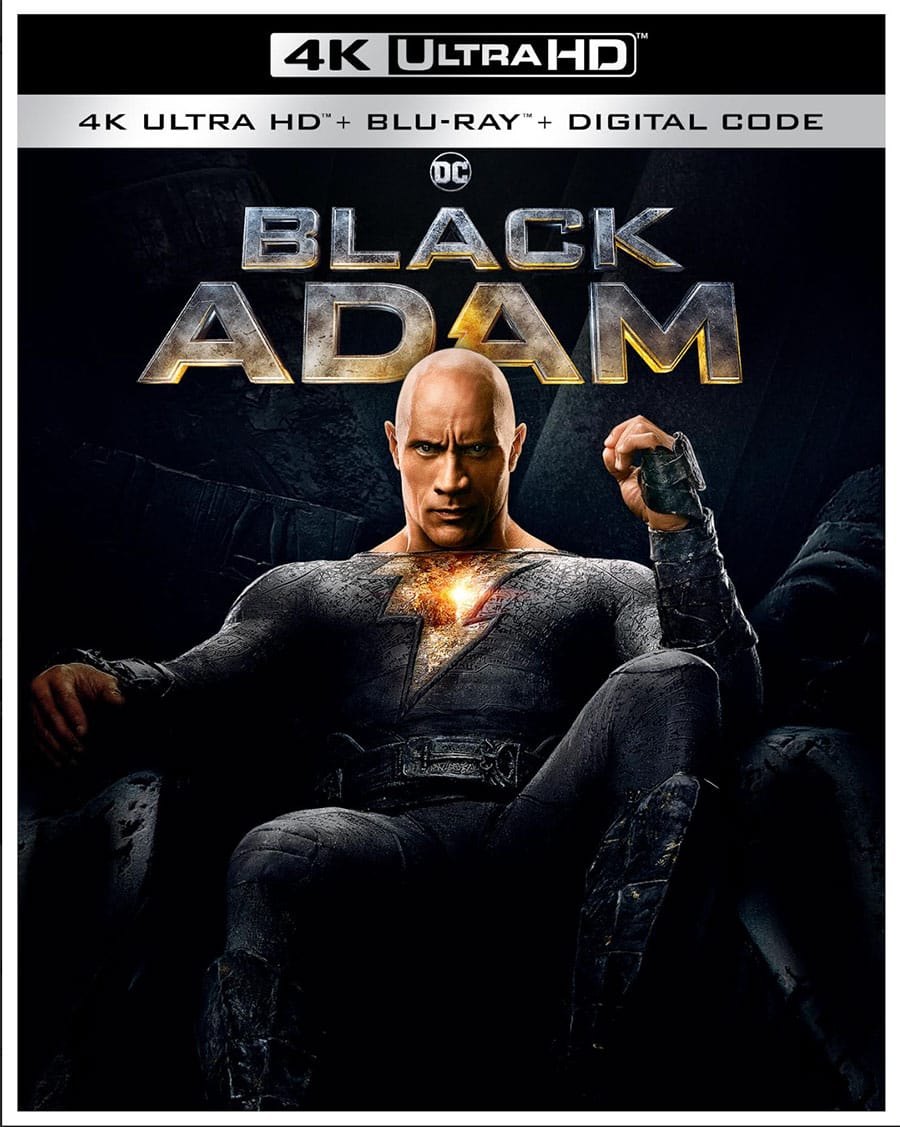 The superhero movie that Dwayne Johnson has been wanting to make for decades is finally here and available on 4k UHD, Blu-Ray, Digital, On-Demand and VHS. Kidding about that last one but you never know with nostalgic trends. The movie is one long action sequence but despite its flaws, I was still entertained.

The movie centers around Adam (Dwayne Johnson), an ancient superhuman who gets released from imprisonment by a group of archeologists. One group is looking for a magic crown of Sabbac and the other group wants to free Adam so he can be “their champion” against a crime syndicate Intergang in their nation. Once Adam is free, he leaves a trail of bodies and destruction but befriends Adrianna Tomaz (Sarah Shahi) and her son Amon (Bodhi Sabongui). Amanda Waller calls in Justice Society members Hawkman (Aldis Hodge), Doctor Fate (Pierce Brosnan), Cyclone (Quintessa Swindell), and Atom Smasher (Noah Centineo) to stop Adam but they soon realize there’s a greater threat than Teth/Black Adam.

I’m not aware of Black Adam and the existence of DC but I do know Dwayne Johnson wanted to make this movie for years. Now that the movie has been made, who knows if there will be more of them since James Gunn and Peter Safran took over for DC. There are no plans for the immediate future, that’s for certain. I’m all for a re-do with DC since I haven’t been a fan of the majority of DC movies except Batman films, The Suicide Squad, the first Wonder Woman and Shazam. Most of the movies in the DCEU were dark, overly-CGI muddled messes. Sorry, not a fan of Zack Snyder’s work.

This movie kind of fits next to Shazam a little, it’s certainly connected that’s for sure since Djimon Hounsou makes a cameo and Teth Adam needs to say “Shazam” as well. This felt like one looooong action sequence and you’re just exhausted after watching it. Once it starts, it doesn’t feel like it stops until the movie is over. I was still entertained since I do like a lot of Dwayne Johnson movies, plus I did like the Justice Society side of things as well. The problem with a lot of this is there really isn’t any time for the characters to show some depth or backstory. They are immediately forced into action when Teth Adam is out causing havoc.

Acting aside, Dwayne didn’t really do much besides deliver some lines and look mad. He obviously already looks like a superhuman so he’s got that part covered. I guess that’s part of the character so Dwayne’s usual charisma doesn’t really come across in this. Pierce Bronson was good in this and I was intrigued by his character. Aldis Hodge’s Hawkman was like a Captain America/Tony Stark type of character. It was nice to see Sarah Shahi in something again since I enjoyed her character Shaw in the CBS show Person of Interest. The rest of the cast were mainly background actors besides the group I just mentioned.

After you see the movie, there’s a lot of decent extras to watch. There’s the history of Black Adam, Who is the Justice Society, there’s featurettes on the action, the costumes, and other behind the scenes look at things. The History of Black Adam was narrated by Sarah Shahi and gives you a look at the character and how he evolved over the years in the comics. The presentation of this and the Justice Society one was a little…forced with the actors having to do the presenting. There’s some good content in there though and gives you a good background on the comics, which I’m not familiar with.

While there are flaws with the plot, some backstory, too much action, too dark and CGI fest, I’d still like to see more of Black Adam in the future if James Gunn feels it fits in his new DC universe. If he can redo Suicide Squad and make it a fun movie, anything is possible. I also wouldn’t mind seeing Aldis Hodge as Hawkman in future DC stuff but everything is up in the air at this point.

If you have enjoyed the latest comic superheroes over the years from DC, you’ll probably be entertained by Black Adam. At the same time, I can see why a lot of people are tired of these movies. As long as the movie has a good story, acting, some action and is enjoyable, I’m going to like it. This perhaps had too much action and not enough story development.

Features:
The History of Black Adam
Who is the Justice Society?
From Soul to Screen
A Flawed Hero
New Tech in an Old World
Taking Flight
Kahndaq: Designing a Nation
The ROCK of Eternity
Costumes Make the Hero
A New Type of Action