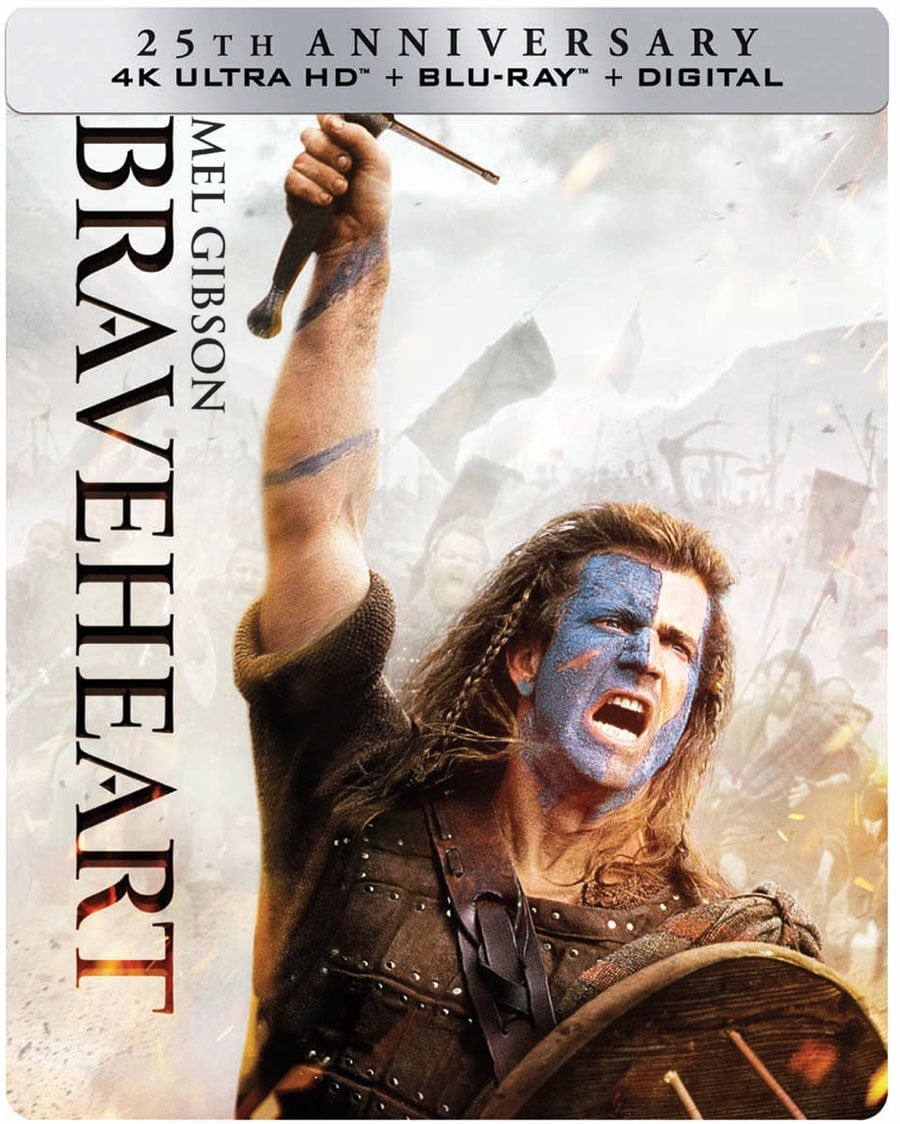 Braveheart is also celebrating an anniversary this year, it’s 25th. Braveheart is and still is one of my favorite movies of all-time. It’s epic, iconic and was a gold standard on how battles should be filmed on the big screen. We don’t need to mention Mel Gibson’s Scottish accent though.

For those that don’t know what Braveheart is, well…shame on you for starters. The movie is a loose re-telling of the Scottish rebel William Wallace (Mel Gibson). Wallace longs for peace and to be a farmer, until he’s given no choice but to fight. Along with friends, fellow villagers and the rest of the country, he goes from village to village, city to city waging war against the ruthless English King Edward “Longshanks.” Wallace befriends Robert the Bruce (Angus Macfadyen) but is stuck between doing what’s right for Scotland and the politics of it. I’d go into more of the story but I’m sure you have seen this movie by now.

I usually watch Braveheart every year. It’s just one of those epic dramas that has always stuck with me. I love everything about it: the story, the characters, the scenery of Scotland, James Horner’s memorable film score, etc. This was the first time watching it on 4k and it looks great. Unlike Gladiator’s 4k transfer, this one had noticeable grains in it. It stills looks pretty though. That Battle of Stirling intro and the whole battle is just classic cinema. I could do without the second love story (with Princess Isabella of France) that was no way true. Sounds like she may have had an affair but it wasn’t with William Wallace. Even as a kid, I never got that part of the movie. He’s so torn up about losing his wife, but then eventually falls for someone like a Princess so quickly? That’s just dumb Hollywood writing there. Fun fact, the real Princess Isabella was only 9 year olds during this part of the war.

Every time I watch the movie, I go down a rabbit hole on Wikipedia about the real life people the movie portrays. Obviously this story is a Hollywood version and most of this stuff never happened. At least not entirely. I need to watch some documentaries on Wallace, Robert the Bruce and Longshanks. Visiting Scotland in 2006 was cool, and seeing where the heart of Robert the Bruce was buried. You get a sense from Scots that Braveheart was a fluff piece. Just reading comments on YouTube (not a good idea), you get a sense from people that Longshanks was a great King and a “Britain First” kind of guy. Yeah, sounds familiar. It’s interesting stuff, the history of everything and makes me want to look more into it. Apparently Angus Macfadyen made a sort-of sequel to Braveheart about Robert the Bruce but I’m assuming it’s not that great.

Mel Gibson’s personal stuff aside, this movie is my favorite thing he has done. Granted his accent is spotty at times but for me, it’s as bad as some other accents I’ve heard over the years. It doesn’t take me out of the movie. I always liked Brendan Gleeson’s Hamish and his Dad, portrayed by a younger James Cosmo. For the longest time, I thought Patrick Bergin played Stephen, but it’s actually David O’Hara. Not like the movie needed to be any longer, but I would have liked to see more time with William Wallace and his uncle Argyle. I guess if there was a William Wallace TV series, I’d like to see that approach before he became a warrior.

Just like the Gladiator Steelbook 4k, this also contains Blu-Ray featurettes that were previously released. About the only thing that’s the selling point is that steelbook case and if you don’t already own this on 4k, which I didn’t. I’m not really a fan of the Steelbook’s paper backing because it just falls off. What’s the point of that really? As soon as you open it, it falls off. So dumb.

If you don’t own Braveheart on 4k or Blu-Ray, the movie looks great in these formats. I felt the movie looked the best it has looked so far, but still feel like there’s much to be improved by it. There was some noticeable grain and some of the scenes were too dark. With that said, I still love Braveheart and will continue to watch it every year.