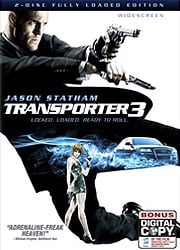 Jason Statham is back as the bad-ass driver Frank Martin! Transporter 3 is the perfect thing to watch on the weekend; a mindless action movie with cool fight scenes and car chases. Transporter 3 is ten times better than the second film, and is more in align with the first film that made this series so popular.

Frank Martin is just trying to enjoy normal things in life like fishing and a quiet dinner. All that changes when a colleague crashes into Frank’s house in Paris. Frank is forced to do a job he didn’t want by a crazy American named Johnson (Robert Knepper). He has to drive a party girl named Valentina (Natalya Rudakova), across Eastern Europe. She ends up being the daughter of Leonid Vasilev, who’s the head of Ukrainian Environmental Protection Agency. Johnson is blackmailing Vasilev into signing a deal that would bring in a ship full of toxic chemicals. Hot on their trail is Frank’s buddy Inspecter Tarconi (Francois Berleand), as he pieces everything together to help Frank out. Frank Martin is stuck having to deal with that, falling for Valentina, and saving his own ass. Now you’re problem asking yourself, why doesn’t he just drive away from this all? Well not so fast hotshot! Frank and Valentina have tracking bracelets on, and if they go more than 75 feet away from the car, they go Ka-Boom!

I didn’t have any expectations for Transporter 3, because I was extremely let down for Transporter 2. I felt that film knocked the series down a peg or two. I think with this movie, it’s slightly on par with the first Transporter movie. Back in the spotlight is Inspector Tarconi, who was missed in the second film. Sure, he was in the beginning and ending of the movie, but not really involved. Jason Statham is Jason Statham, handsome tough guy who fights with his shirt off. His movies are all alike but he got his start in action/kung-fu films with the first Transporter. He’s our Chuck Norris of our generation! The female star of the movie is Natalya Rudakova, who plays the Ukrainian girl. I’m not sure what is it with the Transporter movies, but I never like the female leads. Last movie was some anorexic freckled, short-hair girl that looked like an emo boy. This time it’s a fiery red-head with tons of freckles on her face and who can’t act. I don’t get it, who’s the casting director for these movies? I thought casting Robert Knepper from Prison Break was a good choice though. I have a feeling he’s going to be playing many bad guys in lots of films. What can you say; he’s a great villain actor!

The action was great and stylish. The choreographed fight scenes were very cool, just like with the rest of the movies in the series. The BMX scene was not believable but still fun to watch. Are we to believe before cars, Frank Martin was a BMX star? I like the plot device that they couldn’t leave the car or go too far from the car. It made things new and different. It didn’t feel like the same old crap in a Transporter movie. Some of stuff he does in the movie is unbelievable and more than likely, impossible to do. The stuff they do in Transporter 3 should be on Mythbusters. Getting air from a tire under water, driving your car onto a train? Stuff like that made me shake my head in disbelief. At least it’s not as bad as the second film with some of that crap they did in that one.

The 2-Disc Edition DVD is more or less, only 1 disc. The second disc contains a digital copy of the movie. I wish they would stop promoting that as something extra in the title. It’s cool that they include that, but just don’t promote it like there are more extras on that other disc. Anyway, the bonus features include commentary, a featurette about the real Transporters, behind the scenes footage, storyboards and more! The Transporters in the Real World was really interesting and worth watching. Real life special agents and transporters of criminals, packages, etc. talk openly and secretly about their jobs. They claim it’s nothing like the Transporters movies and it’s nothing glamorous at all. The other featurettes were your standard bonus features, but still interesting nonetheless.

If you liked Transporter 1 but felt disappointed with Transporter 2, then you should be happy to know that the series gets back on track with Transporter 3. The film has great action and is a lot of fun to watch on a rainy afternoon. Check it out!