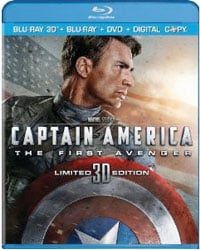 Captain America: The First Avenger was one of the many comic book movies that came out this summer. It’s one I wasn’t expecting to be as good as it was, in fact I thought it might suck when I first heard it was coming out. Thankfully, I was wrong! Captain America is an entertaining popcorn flick that is part WWII movie and part superhero movie.

The movie is about skinny, sickly Steve Rodgers (Chris Evans) from Brooklyn who wants to defend his country against the Nazis and join the military. Time after time, he fails the test while he sees friends like Bucky (Sebastian Stan) out there defending their country and getting the girls. When Rodgers is trying to enlist again, he’s overheard by Dr. Abraham Erskine (Stanley Tucci) who allows him to enlist into his super-soldier program. His superiors of the program Colonel Chester Phillips (Tommy Lee Jones), and British agent Peggy Carter (Hayley Atwell) are skeptical of Rodgers at first but soon see his value. Rodgers is picked to be the first test subject of the program and becomes the super soldier they all have envisioned. Soon after, Steve Rodgers gets sucked into the war bonds effort and becomes Captain America in a song & dance tour. He finally gets sick of that and starts to make a difference in the war. While all that is happening, Nazi officer Johann Schmidt (Hugo Weaving), a.k.a Red Skull, has found some magic power in Norway that can be used as a weapon against the world. Schmidt veers off from the Nazi party and plans to use that magical weapon for world domination. You know, same old same old.

I honestly don’t know too much about Captain America and the character. This was a great origin story, especially for newbies like myself. I don’t know if this falls in line with the comics at all so can’t really compare the movie and comics. I understand that things have to be a little bit different so I’m sure they changed things up for the movie. Captain America was just a joy to watch because it mixes the WWII movie and superhero movies so well. It’s got humor, a great chase scene, some other decent action scenes, and the cast wasn’t bad either. Chris Evans did a job well done as Steve Rodgers and I actually didn’t mind when his head was on a small body. Some people had problems with it and those scenes took themselves out of the movie, but not for me. Sure, sometimes it looked like he didn’t have a neck or chin but it didn’t take me out of the movie. I liked seeing Hayley Atwell for obvious reasons, and it’s always great to see Hugo Weaving playing the villain. He’s truly one of the best actors to play a villain. I also liked the Howling Commandos, the team with Captain America and really wanted to see more of them. It’s kind of upsetting that we probably won’t be seeing them in the sequel since it takes places in modern times. I think one of the reasons why this movie worked because it took places in the 1940s. Really don’t know how the sequel will be now that it will take place after The Avengers.

The only problems I really had with the film was with the ending and the lack of action sometimes. The action was cut up into montages and wish we saw more of that instead of just quick clips of Captain America fighting. The ending was kind of disappointing since Captain America doesn’t get to be with Agent Carter. I suppose he could look her up in the sequel or in the Avengers, but she will probably be close to 90 something if she’s still alive. Not sure if Captain America is into knee knockers though.

The Blu-Ray/3D set has plenty of featurettes, deleted scenes, and other goodies for fans to watch after the movie. There’s a short film called “A Funny Thing Happened on the Way to Thjor’s Hammer” which features Agent Coulson getting some gas in the middle of the desert. Nothing to do with Captain America, but it’s fun to see that character that’s apart of Iron Man, Thor and The Avengers. The 6 featurettes were great! There’s one on the costume design, howling commandos, “heightened” technology, the transformation and some others. there’s also a few deleted scenes including an extended look at Captain America meeting Nick Fury. I’m glad they took the time to get into things with the making of the movie considering sometimes studios simply ignore things like that.

Captain America is a surprisingly fun comic book movie that should please comic nerds as well as new fans of the character. Blu-Ray is the way to go, and if you have a 3D TV and want to watch this in 3D, go for it. I’m not a fan of 3D so I’d recommend just sticking with the Blu-Ray. The movie looks fantastic on Blu-Ray by the way, which is another reason to upgrade to Blu-Ray because it’s worth it!