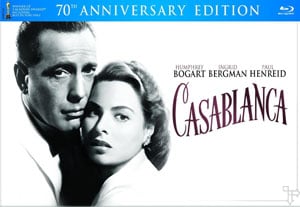 Got 13 hours to kill? The classic Casablanca gets reissued on Blu-Ray along with a ton of content to watch after the movie! This set is a collector’s dream!


Casablanca is set in 1941-42, in unoccupied French Territory and centers around apolitical club owner Rick played by Humphrey Bogart. He’s caught up in a love triangle with Ingrid Bergman’s character IIsa and her heroic husband. Rick is trying to stay out of the war, and just maintain a club in Casablanca but then IIsa, her husband and some Nazis pop in and things get messy from there.

After all these years, this was the first time I saw Casablanca. Of course I’ve seen many of the classic scenes and heard the famous quotes from it but never saw it straight through. It’s always a scene I remember from Disney’s Great Movie Ride as well; as funny as that sounds. Now what did I think of the movie? It was a good movie but it’s something about it that I didn’t really like. Maybe I’m just used to quicker paced movies these days. When I go back to watching older films, I just want to scream at the TV “GET ON WITH IT!” I also don’t really care for Bogart’s character since he’s this American who’s just apolitical and doesn’t want to take sides. That just screams douchebag to me, especially when Nazis are concerned. But maybe IIsa turned him into that way? All I know is I didn’t care for his character and rather see a movie about the piano guy haha. Honestly, I prefer other older films than this.

This 70th Anniversary Edition Blu-Ray set has a bunch of extras, including a photo book, a poster, coaster and loads of extras. You can literally watch this stuff all day if you have the time. A lot of the extras are pre-packaged from earlier releases, and you can tell based on the quality of them too. I liked looking at the photo book and the poster that comes with the box set. The movie itself looked really sharp and nice with the transfer. It’s probably the best it’s going to look. It’s not widescreen but I don’t think it’s ever going to be at this point. There are some movies that just weren’t filmed that way.

Unless you don’t already own Casablanca on Blu-Ray, than I don’t really see any reason to get this box set. There aren’t that many new things added to the set. The movie itself looks great but not sure it’s worth the price tag.

Disc 2:
You Must Remember This: The Warner Bros. Story
The Brothers Warner
Jack L. Warner: The Last Mogul Documentary