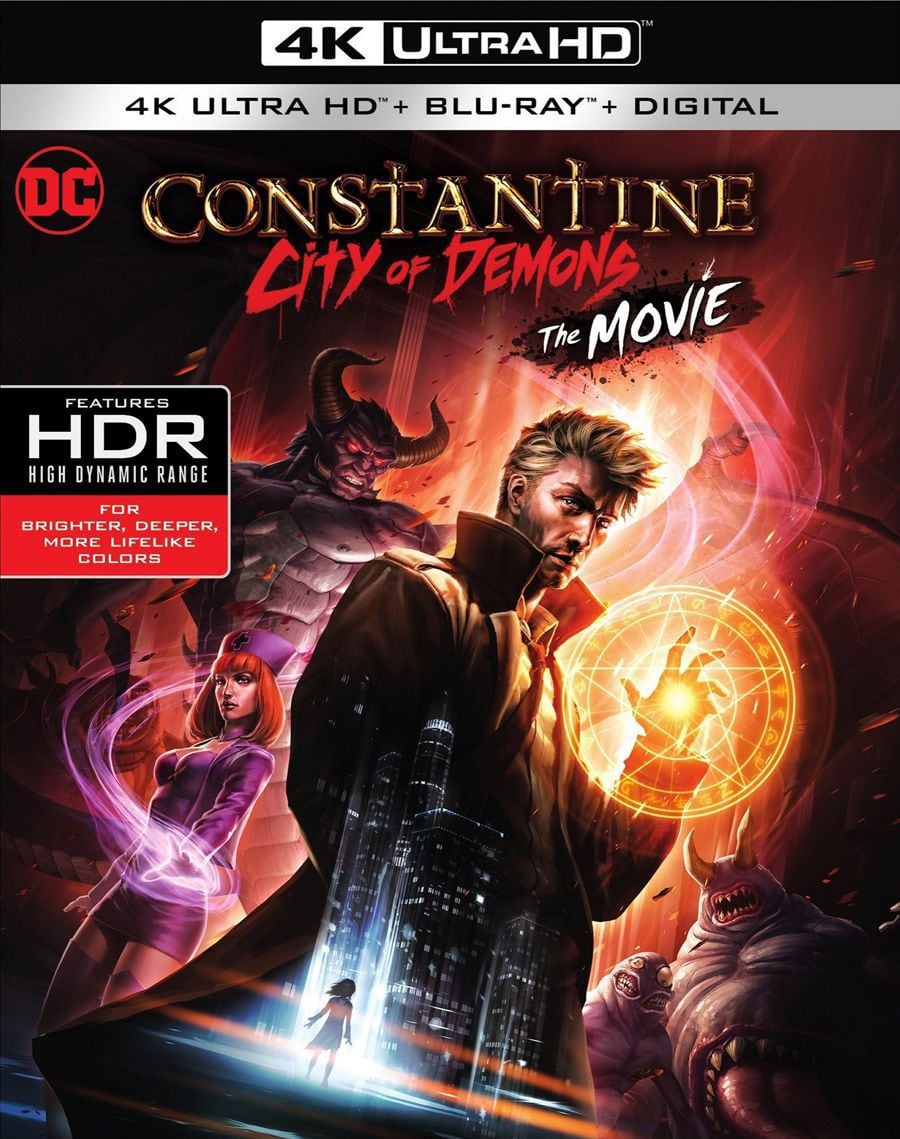 John Constantine is at an all-time low when a smiling face from his past comes to him for help figuring John is the only person on the planet that can help him with the kind of issue that troubles his family.

“Constantine: City of Demons The Movie” takes the animated shorts that appeared on the CW Seed, adds some more scenes to round out the story and pulls everything together into a 90 minute movie that can hold its own against any episode of the show or just about any Constantine/Hellblazer story from the comics.

In “City of Demons” we find Constantine reunited with his childhood friend Chas, whose daughter has fallen into a mysterious coma. Seeking John’s help, Chaz asks him to look into it because something seems very “off” about what has happened. John digs deeper and discovers that things are indeed right up his alley as a trail leads away from London into the United States and Los Angeles in particular. With Chas’s daughter under the protection of the Nightmare Nurse, John and Chas head to the US in order to confront whatever it is that had taken Chas’s daughter.

Holding an R rating, this allows the movie to venture into Vertigo Comics territory for the first time in the live action/animated Constantine realm. There is blood and gore aplenty as well as some sexual situations and a lot of cursing, drinking and smoking…all of the good things that make up the character of John Constantine! If you have a weak stomach, there are a few moments that you might want to hide behind your hands.

Taking cues from the movie title, Los Angeles is overrun by demonic forces that are vying for territory above ground in the heart of the city. While the concept is great and works well for most of the movie, I thought that the idea of pitting demon factions against each other would be a meaty party of the movie but I felt like the setup was great but the payoff of demon versus demon was rushed and lacking. It was true to the character of Constantine so at least there was that.

Speaking of payoff, overall the ending of the movie was one of the saddest and most heart-wrenching Constantine moment that you’ll ever see. The setup was subtle and in a way you knew it was coming but hoped that they didn’t go there but it was totally befitting of the story that was told. Things are also left open for more animated Constantine in the future.

With the 4K UltraHD bundle you get the best in high definition that money can buy as well as both the Blu-ray and digital download included. Features include a Constantine WonderCon panel as well as some history on the character to help you understand this multi-faceted but underrated man named Constantine.

As with the “Vixen” and “The Ray” animated shorts/movies, “Constantine: City of Demons The Movie” manages to stitch things together into a coherent plot in a seamless effort. In fact, other than one moment between animated shorts, “City of Demons” feels much more like the other DC animated movies than “Vixen” or “The Ray” does. Whether you’re a fan of John Constantine from the comics, his NBC show or from the Arrowverse, this movie will show the character in a different light in the best of ways.

Available on Digital and Blu-ray on October 9th!

Bottom Line: “Constantine: City of Demons The Movie” brings an R rating to the table and lets John Constantine just be himself. With a theme of family and friendship it also brings elements and emotions not usually seen about the character himself.
Running Time: 90 Mins
Rating: R
Extras Rating:
Overall Rating: