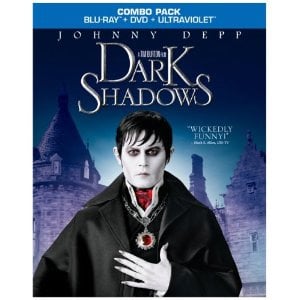 Dark Shadows is the latest Tim Burton movie that stars people that usually star in his movies. It’s entertaining, whimsical and signature Tim Burton. The movie has it’s moments but could still have been better.

The movie starts off in 1760, with the Collins family migrating to Maine from Liverpool. Years later, the Collins’ son Barnabas (Johnny Depp) seduces the family maid Angelique Bouchard (Eva Green), who also happens to be a witch. When he tells her he doesn’t love her, she has his parents killed and she turns him into a vampire. She also makes Barnabas’ true love jump off a cliff. Talk about a psycho! Barnabas is exiled underground and wakes up in 1972. He returns his family home where only a couple of dysfunctional family members live. He plans on returning the family name & business to its former glory, but has to deal with that witch Angelique in order to succeed.

For not knowing anything about the original TV series, I thought Dark Shadows had a good premise. It’s a darker story than say Addams Family and The Munsters, but there are some funny moments in this movie. I think the movie holds up until the end. Towards the end, things get a little messy in my opinion. It felt like they were just trying to cram as much as they could into the movie.

Not surprisingly, Johnny Depp was fantastic as Barnabas Collins and he delivered many of the funny moments in the movie. I also like Michelle Pfeiffer with Johnny Depp and thought they had good chemistry. Do anyone else think that Michelle Pfeiffer and Kristin Bauer of True Blood look very very similar now? I kept having to tell myself that wasn’t Kristin Bauer haha. Eva Green is Eva Green. Chesty, pale, and plays evil very well. Having her in the movie certainly helped I think, but that’s just from a guy’s point of view. The sex scene was really funny, and one of the lighter moments in the movie. I thought Chloe Grace Mortez, Jonny Lee Miller and Bella Heathcote were underused. Chloe had some funny moments but I just felt that we could have used more of her character in the movie.

Can’t review a Tim Burton movie without discussing the cinematography and visuals. Dark Shadows had some beautiful scenes in the beginning of the movie when it took place in 1760s. I wished the movie took place then because everything in those scenes looked like signature Burton. I’d love to have him do another period Fantasy like Sleepy Hollow. Besides the look of the movie, the soundtrack was excellent. Figured it would have to be since it took place in the 70s. Another highlight for me was seeing Alice Cooper in the movie and Barnabas’ reaction to him.

The Blu-Ray has a lot of special features that are about 5 minutes long each. There’s lots of interviews with Johnny Depp, Tim Burton and the rest of the cast. There’s featurettes on some of the special effects, the old soap opera, specific character featurettes, alice cooper being in the film and much more. There’s also some deleted scenes as well but nothing too special in there. At least I can’t remember if they were even decent.

This movie won’t be for everybody but if you get a kick out of Tim Burton/Johnny Depp movies, this a pretty decent movie. I enjoyed it for the most part, even though it’s still slightly flawed. It would be good movie to watch this movie with Halloween coming up.