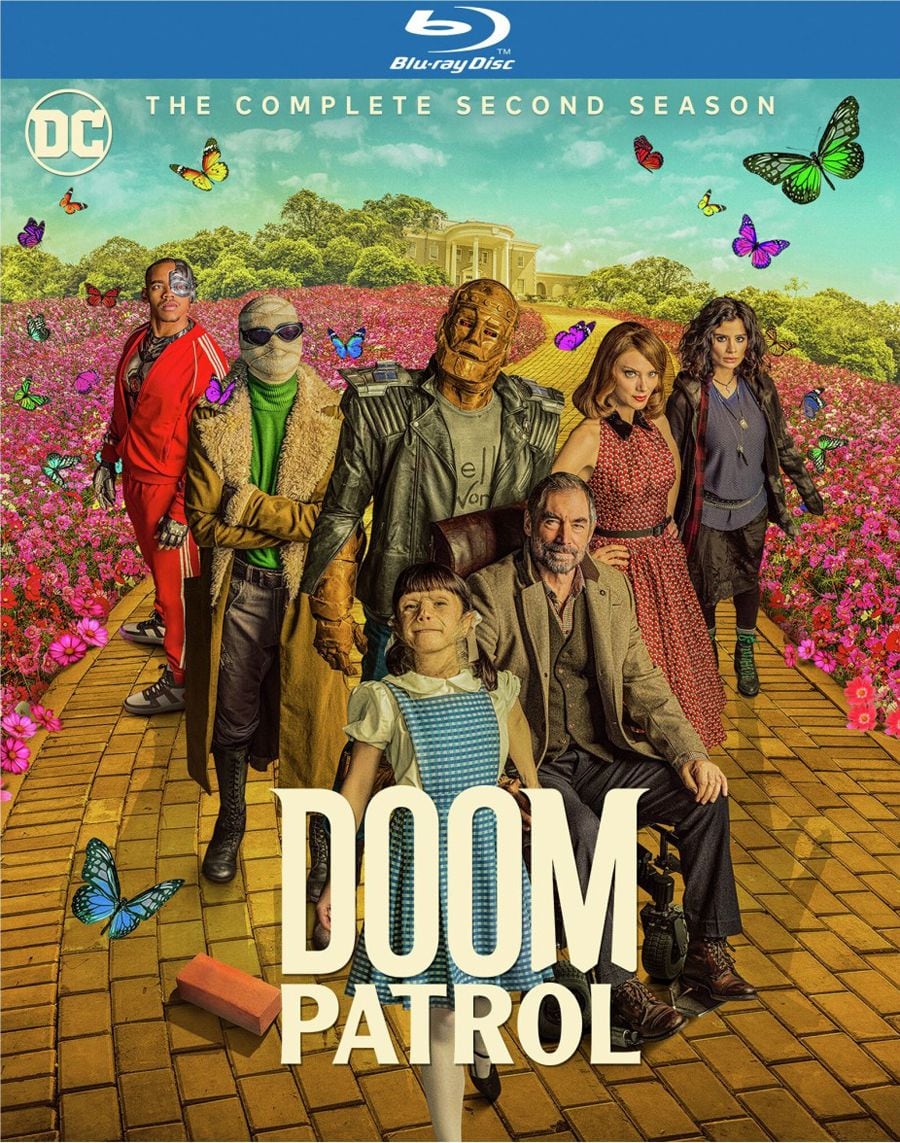 If you thought that the first season of “Doom Patrol” couldn’t get any weirder, well then…welcome to season 2!

“Doom Patrol” season 2 is a half dozen episodes shorter due to the unforeseen halt in production due the pandemic but the creative team still managed to squeeze in enough insanity, humor, violence, love, heartbreak and betrayal…as well as satanic spaceships, negative spirits and talking spiders. Over the course of the season’s 9 episodes we see the misbegotten vagabonds of the Doom Patrol actually accept and embrace their family of freaks and misfits.

The young and mysteriously talented/cursed Dorothy is the focal point of season 2 as she is haunted by the creatures buried within her imagination and the damage that can be and is done when she makes a wish and brings them to life. Dorothy meets one of Jane’s secondary personalities Baby Doll and they become best friends until Dorothy is tired of Baby Doll. The two have a fight with Baby Doll alternating personalities and killing one of Dorothy’s imaginary friends. Dorothy makes a wish and unleashes the Candlemaker, her most powerful and evil of her imaginary friends. Candlemaker enters Jane’s mind and kills Baby Doll and her protector setting forth the closing act of season 2.

We get to see Robotman/Cliff Steele reconcile with his estranged daughter only to have to miss her wedding in order to save the world. Cyborg falls in love…but with the type of woman who is against everything he stands for, and he struggles to realize that while he may see the good in just about everyone, some people are just no good. Rita struggles with the discovery of how her mother actually “jumpstarted” her career and Larry/Negative Man tries to work his way back into his family’s graces only to have everything go completely wrong.

While season 2 was shorter than the first season, I thought that the writing was much tighter as the characters have been coming into their own groove and, while the first part of the season was a slow burn, it finished off strong. The season ends on the most extreme of cliffhangers, even though it felt like there was more to tie up but they made do with what they could due to the shutdown.

One of the things missing from this season release is the inclusion of a digital copy of the show. It is also only available on Blu-Ray and DVD. Top that off with the lack of new special features and it seems apparent that even the completion and release of the season 2 set has been affected by the pandemic.

“Doom Patrol” continues to be something unique in the DC live action universe. The show is full of weird characters and oddness abounds and they’re not popular enough that people are up in arms with some of the creative liberties taken with the material. With that said, the show manages to pull some of the most over-the-top and absurd things from the comic books and makes them absolutely amazing in live action form. The Candlemaker is one of the creepiest characters to grace the silver screen, Jane and her personality disorder is done in a unique way and showcases a very real struggle and the addition of some of the goofy sci-fi campiness such as the Pioneers of the Uncharted can be fun but also take a dark turn. The source material is a playground for writers to mine for strange and unusual things and that’s what makes “Doom Patrol” so great. It truly is like no other show out there and hopefully, since its switch to HBO Max from the DC Streaming Universe, those suits realize it too.

Bottom Line: While shorter by a half a dozen episodes compared to season 1, season 2 of “Doom Patrol” takes everything that worked great in the season before and turned it up to 11. Episodes felt more focused due to the sudden halt to production but that worked out for the better. If you’re looking for a strange and uncanny, much more violent and mature version of the X-Men…”Doom Patrol” may be what Dr. Niles Caulder has recommended.