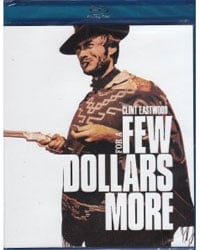 The sequel to A Fistful of Dollars was also released on Blu-Ray, and looks jut as good as the first movie. Believe it or not, I like For A Few Dollars More…err, more, than Fistful of Dollars and I sometimes debate with myself if it’s better than The Good, The Bad and the Ugly.

The Man with No Name, this time called “Manco” (Eastwood) returns as a bounty hunter in the Southwest. His bounty hunter rival, Colonel Mortimer (played by Cleef, not Johnny Cash), is dressed in black and they team up to go after a big gang lead by psychopath El Indio (Maria Volonte). The two bounty hunters struggle to work with each other, just because they want the big prize for themselves. Mortimer wants Indio dead or alive, for reasons we don’t know until the very end of the movie.

For A Few Dollars More is one of my favorite Westerns. For some reason, I almost like this more than the Good, The Bad and the Ugly. With the success of the A Fistful of Dollars, you can sense that Leone was confident in his directing and storytelling. 20 minutes go by that we don’t even see Clint Eastwood. We get a glimpse of Colonel Mortimer and how he does his business. The way Leone brings his story into “Manco’s” is great and I love how the story comes together at the end. I almost wish Lee Van Cleef’s Colonel Mortimer was the star of a few spin-offs after this. In the The Good, The Bad, and the Ugly, he plays the bad guy and not sure I like him bad. His character & background were stronger here I thought.

The acting was better in this movie, the chemistry between Eastwood and Mortimer was excellent as well. It’s probably why I like this movie so much. Not to mention the outstanding, chilling score from Morricone and Leone’s gritty film-making. Out of the Man with No Name trilogy scores, The Good, The Bad, and the Ugly is my favorite score but this is definitely up there. The way the music plays a big part in this movie makes the tension that much more intense. “When the music ends, begin.”

The movie itself looks superb on Blu-Ray, which makes me scratch my head on how they made a movie from the 60s look so good. The extras for For A Few Dollars More were similar to that of a Fistful of Dollars. Christopher Frayling talks about the various graphic design and posters of the movie, he talks about how this movie really set the standard in future western movies, and provides audio commentary as well. There’s a few extras on here that were on previously released editions of the DVD as well.

If you like this western, then be sure to pick this up on Blu-Ray. The quality is excellent I think, and definitely worth the upgrade!