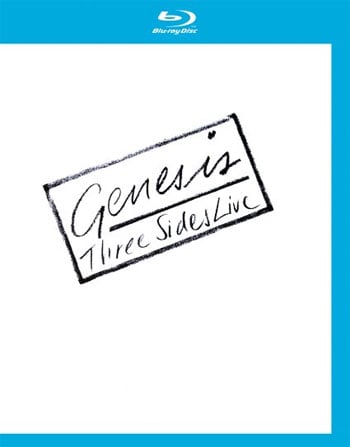 Genesis’s Three Sides Live was filmed in 1981, back when Abacab tour was happening in North America. The footage was originally released on VHS but has been restored for Blu-Ray! As a long-time fan of Genesis, I was stoked for this to be released on Blu-Ray.

This is the first time the ”Three Sides Live” was released on Blu-Ray, since this footage was originally on 16mm film. For the most part, the concert features tracks from Duke and Abacab albums. So if you’re looking for the Peter Gabriel era Genesis, this was after that. I’ve always been a fan of Genesis of the 80s. My Dad was the reason for getting me into Genesis since I was would just always hear it growing up. I still remember the days where he was blaring “Abacab” in his garage. He was more of a fan of Peter Gabriel era of Genesis though.

This concert footage features some of my favorite Genesis songs like “Abacab,” “Misunderstanding,” “No Reply At All” and “Turn It On Again.” I just love the drumming and keys in “Abacab.” “Turn It On Again” is probably one of my favorite Genesis’ song of all-time. The concert is mixed in with some interviews, some behind the scenes stuff and some radio interviews the band did. As far as the quality is concerned, it’s okay and probably the best you’re going to get with this footage. The footage can be a bit fuzzy at times but what do you expect from film from early 1980s. The only bonus from this Blu-Ray is some audio tracks that featured in the concert. The music plays over an image instead of video.

If you had this on VHS and want to own it again, this is definitely a worthy purchase! Or if you’re just a Genesis fan, this is a no-brainer…get this!