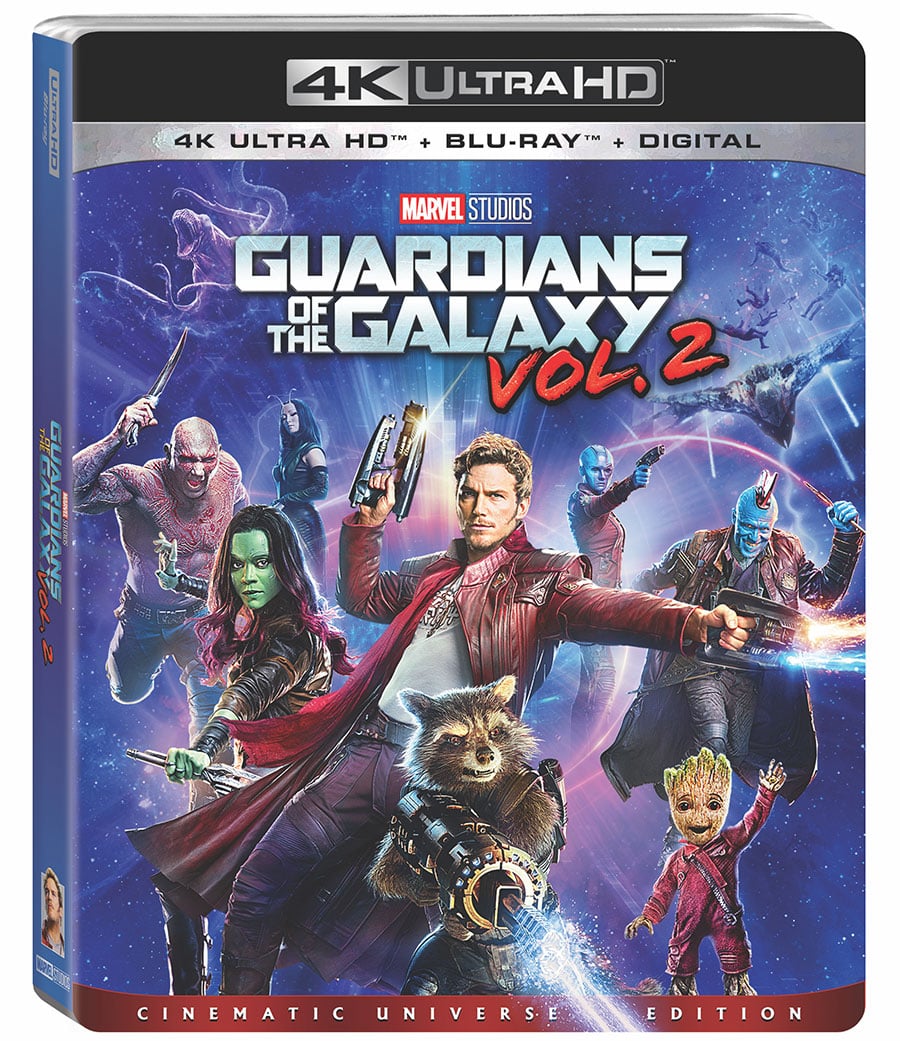 Guardians of the Galaxy Vol. 1 is my favorite Marvel movie or definitely one of my top 3. Volume 2 is funnier at times, sadder at times, has a better soundtrack, and just as entertaining. With that said, I still prefer Volume 1 over Volume 2 for some reason.

In the sequel, the Guardians, Peter Quill (Chris Pratt), Gamora (Zoe Saldana), Drax (Dave Bautista), Rocket (Bradley Cooper), and Baby Groot (Vin Diesel) have to do a job for a race of people called The Sovereign. When the job is completed, everything is all good until Rocket decides to steal some batteries from them which pisses them off. They manage to escape the Sovereign’s drones but crash their ship on a planet. There, they run into Peter’s long-lost Father, Ego (Kurt Russell) – who’s a bit out there and an a celestial god and planet. Meanwhile, Yondu (Michael Rooker) is hired by The Sovereign to track down the Guardians. Enemies become allies, and people who think are good turn out to be really bad. It’s another fun trip with the Guardians as they to save the galaxy from ultimate destruction…again.

*Going to discuss spoilers in here so beware*

I loved the movie, the characters, the jokes, the action scenes, the special effects, and the soundtrack. I don’t know, there’s something about this that feels not as good as the first movie? It’s kind of hard to top Volume 1 for which is probably why I’m having hard time rating this one. James Gunn has done awesome job with both movies so far. I guess I’m a sucker for origin stories which is why I prefer that one over this one. I’m glad we got the whole Father-thing out of the way and that was the main focus for the second movie. I thought maybe that would have been more of the focus in the third movie. That “baseball” throwing scene gets me crying every time, especially since Kurt Russell looks like my Dad with a beard. Other scenes that I absolutely love include the Rocket vs Ravagers, Yondu vs Ravagers scene, the Sovereign drones scene and the ending.

I absolutely got a kick out of what they did with Groot and making him act like a 2 year old. Considering I have a toddler son myself, I could say without a doubt they act like that: hitting you when you don’t deserve it or expect it, you tell them something and they do it anyway and so many other things. They got the mannerisms of a toddler down pat! How adorable was it, after all the beating Drax got from Baby Groot in the end, he still wanted to go to him when it was time for bed. Speaking of Drax, he was the comic relief this time around and had a lot of funny lines and scenes. “I have famously huge turds.” The star of the movie of course has to go to Michael Rooker as Yondu. “He may have been your father, boy, but he wasn’t your daddy.” That line kills me and waterworks happened both times that I saw this. Volume 1 has same effect, with the “we are groot” line. These movies don’t work if they main characters aren’t good and Chris Pratt and Zoe Saldana are flawless I think. As far as the new members on the team with Mantis and Kraglin, we’ll see what they do in Avengers: Infinity War and the next Guardians. Mantis was innocent and cute character, and played off well with Drax but don’t know what she could do besides being a one trick pony. Kurt Russell as Ego was perfect in my opinion. It sucks beyond belief that Yondu finally becomes a Guardian, and that’s all we’re gonna get of him. Just when he’s looking all punk rock, damn you James Gunn! I’d like to think he would come back in Avengers or something but then the whole sacrifice thing is all for nothing and doesn’t hold any weight. I’d love to see some spin-off or more of Sylvester Stallone & that crew in the third movie, especially since they teased it in the post-credits.

The extras for the Blu-Ray include a 37 minutes or so making of featurette, a funny music video for the song “Guardians Inferno” off the soundtrack featuring The Hoff, some deleted scenes, a gag reel and audio commentary. The gag reel was funny; how can you not laugh this cast especially since Chris Pratt is so goofy a lot of the times. The music video was cheesy retro good fun and loved how James Gunn brought David Hasselhoff into the MCU. There’s an extended adolescent Groot scene from the post credits, which was fun to see. The featurette is great to see but of course, I want more more more! Maybe I’m spoiled from all those Peter Jackson Blu-rays from The Hobbit and LOTR. The Blu-Ray also has audio commentary with James Gunn but I didn’t listen yet but I will. I really like how involved Gunn is on social media when it comes to his movies and gives fans a chance to shine in the spotlight. He always shares fan art, myself included, so that was a honor that the director liked something I designed.

Guardians Vol. 2 is a fun one that I think I’ll enjoy with each viewing, like I did with Guardians Vol. 1. I’m not sure what it is but I still prefer Volume 1 because it was an origin movie but this just as entertaining! I can’t wait to see the Guardians interacting with other characters in the MCU in Avengers: Infinity War. Should make for some interesting scenes! Guardians 3 will most likely feature Adam Warlock, which was teased at the end in the post-credits. Time to go read up on him in some wikipedia pages.

– A four part, behind-the-scenes look at the making of the film:

-In the Director’s Chair with James Gunn
-Reunion Tour: The Music of Guardians of the Galaxy Vol. 2
-The Visual Effects of Vol. 2
-Showtime: The Cast of Vol. 2
Audio Commentary – By Director James Gunn