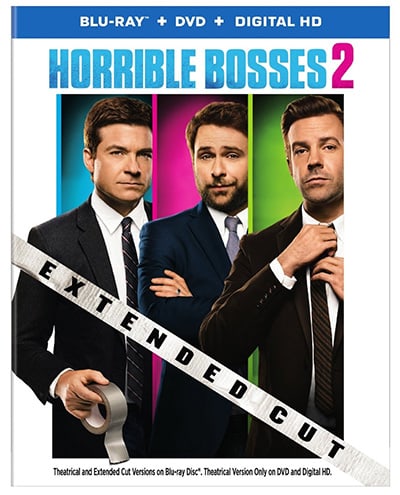 The sequel to Horrible Bosses doesn’t suffer the sequel blues and thankfully, it’s just as funny as the first one!


Horribles Bosses 2 is sort of similar to the first one, except this time Nick (Jason Bateman), Dale (Charlie Day) and Kurt (Jason Sudeikis) get into the kidnapping game. At the beginning, the guys decide to get into business together and develop a product called the Shower Buddy. They get financial backing from a big retailer owned by Bert Hanson (Christoph Waltz) and his son Rex (Chris Pine), only to have the rug pulled from them. Hanson doesn’t agree to back their product after they paid for 100,000 products to be made. The next logical solution for them is: kidnapping.

I really liked Horrible Bosses and the sequel is just as funny. There’s plenty of sight gags, hilarious one-liners and other outrageous moments like in the first movie. I particularly liked the scene where the guys were demonstrating the Shower Buddy and then the name of their company is said out loud. The scene at the sex addicts meeting was hysterical as well.

Having Jennifer Aniston come back and play the filthy, sex addict dentist was great plus the addition of Chris Pine to the mix was fun as well. I also liked Kevin Spacey returning as well as Jamie Foxx. Although, I could have used more Kevin Spacey but maybe if there is some sort of third movie, he will be in it. The selling point of the movie is the 3 main characters of Nick, Kurt and Dale. The chemistry between the three is excellent and it’s just funny to watch. Jason Sudeikis’ one-liners seemed like they were even better this time around. I was happy to hear him do his Louisiana accent that he used to be on SNL.

If there were any complaints about the movie, it’s probably just the story. While the kidnapping angle is believable, the outcome of this movie isn’t. They should have been arrested and sent to jail; then they could have done the third movie in jail.

The special features on the Blu-Ray were good. Lots and lots of bloopers, outtakes, and alternate one-liners mixed in with behind the scenes footage and interviews. You can really tell the cast had a blast filming this. It seemed like the main goal for each actor was to make them crack or laugh. In the featurettes, you find out what was the one line Jennifer Aniston didn’t want to say.

It’s safe to say that if you enjoyed Horrible Bosses, you’ll love the sequel! I’d love another movie but not sure if it would outstay its welcome. Not sure what the premise would be either.

Join Jason Bateman, Charlie Day, Jason Sudeikis, Jennifer Aniston and Jamie Foxx for laughs you won’t find in the film, including:
Endless Laughter Guaranteed!
Jason Bateman, Charlie Day, Jason Sudeikis and filmmakers will do almost anything for a laugh.
Let the Sexual Healing Begin
Follow the road to recovery with the sex addict group.
Off the Cuff: One-Liners You Didn’t See
They came “thiiiis” close to making the final cut.