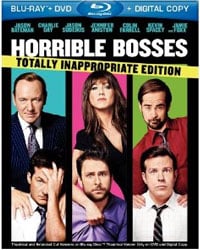 Horrible Bosses could very well be the funniest movie of the year; it’s certainly as funny as Bridemaids if not funnier. I consider Horrible Bosses a brother to Office Space and it will make you laugh and want to quit your job at the same time.

The comedy follows three friends as they struggle to go to their jobs and put up with their bosses. Nick (Jason Bateman) has a sadistic boss (Kevin Spacey) who doesn’t give him the promotion he wanted, Kurt (Jason Sudeikis) has to put up with his deceased, former boss’ cokehead son (Colin Farrell), and Dale (Charlie Day) has a sexually active boss (Jennifer Aniston) who harasses him and wants him to sleep with her even though he’s engaged. The trio jokingly think they should just kill their bosses but then start to re-think the idea when their jobs become unbearable.

Horrible Bosses is very similar to Office Space, and both are equally funny. The Office should take note on how you handle workplace comedy! Like with Office Space, this movie makes you just want to quit your job. I’m not sure I would have handle the situation the same as they did in the movie. But then again, it wouldn’t have made for a funny movie then. I’m sure the notion of hurting a bad boss has enter some people’s minds, but it’s kind of a funny premise which makes this a movie relatable to a lot of people.

Other comparisons to Office Space is that the movie starts out as a workplace comedy and then goes into something else. Plus, the actors have great chemistry with each other. Jason Sudeikis and Charlie Day have already worked on Going The Distance together so the chemistry was already there, but adding Jason Bateman was the perfect match for the two. Of course, everybody will be talking about how hot and raunchy Aniston was in the movie. I agree. She needs to do more roles like this because she was extremely sexy and funny at the same time. Kevin Spacey can play a real prick sometimes and he certainly does in this movie as well. Kind of reminded me of his character in Glengarry Glen Ross. Colin Farrell was funny as the come-over haired cokehead, but think he was the most under-used out of the group.

The Blu-Ray offers theatrical and extended cuts of the movie, a few featurettes and a digital copy of the movie. The extended cut might be a few minutes longer than the original cut but not sure what was added. This was the first time seeing the movie so…The featurettes were decent, and the usual fluff pieces that range from 5 to 7 minutes long.

The actors and crew discuss their least favorite careers and bosses, there’s featurettes on the soundtrack and playing a mean character, plus some deleted scenes as well. The deleted scenes weren’t that great. Some were different intros to the movie with Jason Bateman; there was one scene when Nick dreams of dragging his boss out the window. That scene was in the movie but the deleted scene was seeing Kevin Spacey’s character screaming he’s fired while impaled on a sign. It was graphic but probably should have been left in. It’s a dream sequence after all!

Fans of workplace comedies like Office Space will really enjoy this one so be sure to get the Blu-Ray/DVD combo!

Features:
My Least Favorite Career
Surviving A Horrible Boss
Being Mean Is So Much Fun
The Making of the Horrible Bosses Soundtrack
Deleted Scenes
BD Live Enabled
Digital Copy Of Feature Film