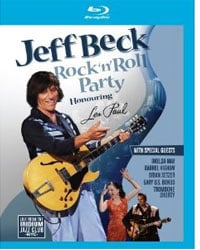 Guitar master Jeff Beck pays tribute to the late, great Les Paul with this rockabilly party in New York. This-Blu-Ray is a must-own if you love Les Paul, Jeff Beck, and rockabilly music.

This concert was filmed at the Iridium Jazz Club in New York City, the same club guitar pioneer Les Paul performed at every week until he passed away at the age of 94. Joining Jeff Beck is British rockabilly guitarist & singer Darrel Higham, his wife/Irish rockabilly goddess Imelda May, Brian Setzer, Gary US Bonds, and many more! The musicians play several Les Paul and rock and roll/rockabilly tunes that’s fun to watch and listen to. You’d think the crowd there would be dancing around but since it’s a seated venue, you don’t see that. The show is a perfect showcase for Imelda May and her singing, as well as Darrel Higham. Obviously, seeing Jeff Beck wail away on the guitar is something to see as well. The concert footage is about an hour and half long, but doesn’t feel like it at all.

I can’t say I know too much of Jeff Beck’s work besides the Yardbirds so it was nice to finally to have seen him play. His guitar work is quite impressive. I heard some of Imelda May’s music and dug it, but might have to re-listen to her music some more. I also want to check out Darrel Higham’s music as well. I just liked listening to all of the music that was played during the concert. I honestly didn’t know what type of music would be played but was happy to see it was old school rockabilly.

For a concert Blu-Ray, there’s actually a decent amount of extras. Besides the concert, there’s an interview with Jeff Beck, a 18 minute behind the scenes featurette interviewing fans, seeing things put together and such. Besides that stuff, there’s footage of Jeff and his guitars, footage of Les Paul and his little “black box.” Like I said, loads of stuff to watch after the concert itself.

Features:
Interview with Jeff Beck
Behind the Scenes
At Home with Jeff Back and his Guitars
Jeff Beck and Les Paul – Rock ‘n’ Roll Tonite
Les Paul and His Little Black Box