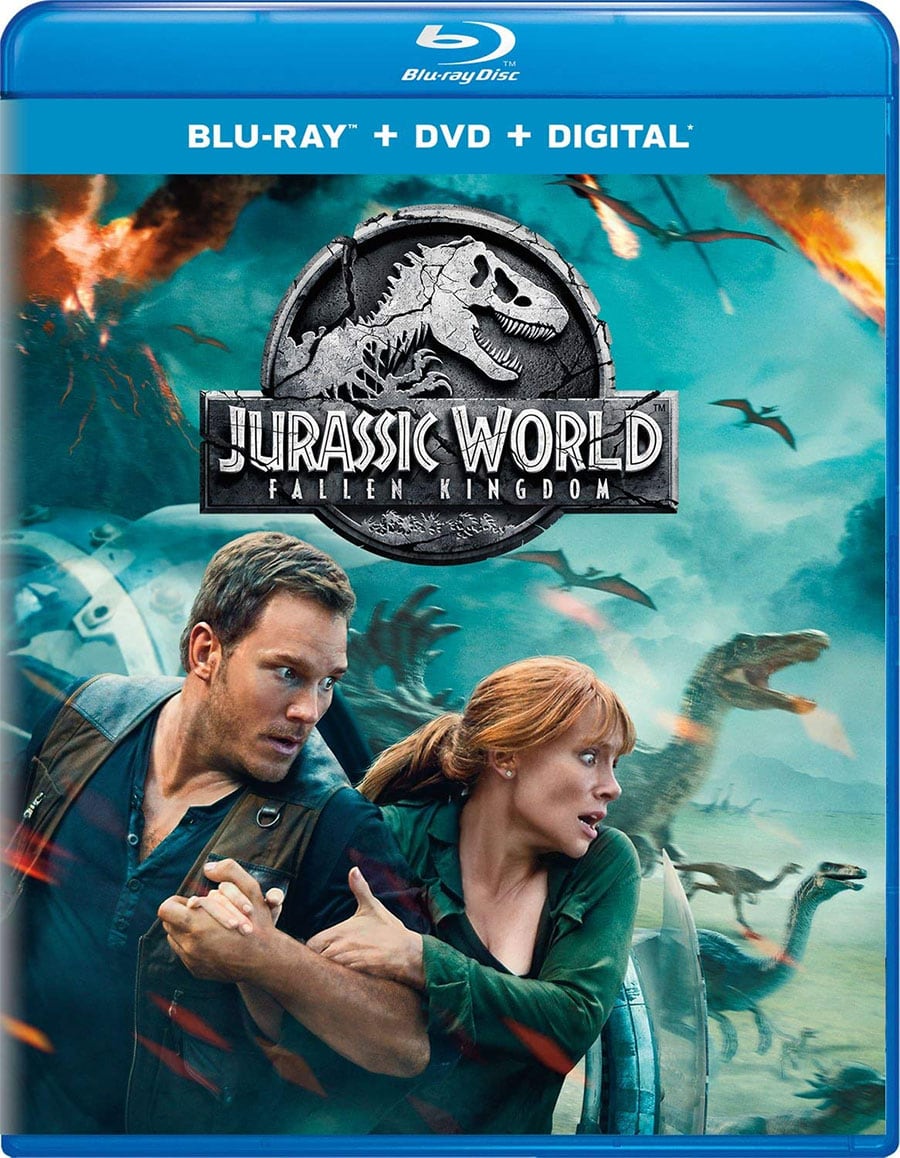 I liked Jurassic World but I didn’t get a chance to see Fallen Kingdom in theaters, plus it got really mixed reviews so I wasn’t in a rush to see it in theaters. I don’t think the movie was bad as people made it out to be or maybe I just lowered my expectations tremendously before I saw the movie? Either way, I think people will either hate or like it.

Isla Nublar is about to be wiped out by a volcano, along with the remaining dinosaurs that still live on the island. While people in D.C. debate whether or not to let the dinosaurs be exist again, Claire (Bryce Dallas Howard) is approached by Hammond’s former partner, Benjamin Lockwood (James Cromwell) and his aide (Rafe Spall) to save as many dinosaurs. They want to have them relocate to another island that’s safer. Claire seeks out Owen (Chris Pratt), who’s perfectly fine just building a cabin in the woods but eventually he comes around. She wants Owen to save his favorite raptor Blue and others with her before they get killed. Of course things don’t go as plan and people have ulterior motives with the dinosaurs.

I’ll get to the complaints first. Jurassic World: Fallen Kingdom is pretty much Lost World but a worse version of it. You can run things parallel to it and it all lines up with being very similar. I actually thought they would have been on the island a lot longer than they were, which was a little disappointing. After they got off the island, I was curious to see where they would go with it. That route was a horror thriller style movie in a giant mansion. I actually didn’t mind that as much but thought they needed to have more time on the island like The Lost World was. Having the volcano play apart of the island was interesting, and certainly made things even more terrifying so I think they should have capitalized on that more. The island parts just felt too rushed and very similar to Lost World, besides the whole volcano thing. The saddest part of the movie was when the Brachiosaurus was left behind at the island, considering that was the first dinosaur you see in the original movie, it makes it even sadder. Besides all that, it just seems like the characters are getting way more stupid and some are becoming caricatures. Plus, not the mention that Jeff Goldblum should have been in the movie besides the cameo in the beginning and the end! Plus, what the hell was with that ending and having all the dinosaurs roam free among us. Just when it was getting really interesting, they cut to the credits.

I thought the opening sequence was the funniest, maybe it wasn’t intentional but I laughed for it. One worker is doing something on the island and everyone in the helicopter is telling him to run since a T Rex is there. He escapes the T Rex on the Helicopter ladder barely and everybody is cheering, until that big whale dino comes from the water and scoops him up. Really funny stuff! Even with the complaints I have, I still enjoyed the movie. I didn’t have a problem with the cast, besides the so-called villains where they seem to be clones of previous movies or they are just getting more ridiculous. I liked the element of the volcano and how that played more of a danger at times than the dinosaurs were. I even liked the dinosaurs in the mansion and it felt like a horror movie in a way. It’s just something about the movie where it could have been better in a lot of areas like the story, character development and other things like that. I want a smart dino movie. A movie where no one is stupid or doing stupid things and you can see their death coming a mile away. It makes things very predictable. If they make another movie, hopefully they go that route but also have Goldblum in it a lot more!

The Blu-Ray had a bunch of featurettes on it, some a lot longer than others. You had featurettes on filming on location in Hawaii, chemistry between Chris Pratt and Bryce Dallas Howard, lots of footage of the action sequences, a featurette on the man, The Goldblum, appearing in the movie as well some Chris Pratt journal videos. There’s a lot of good stuff in there and worth checking out if you got the time to watch.

Jurassic World: Fallen Kingdom definitely won’t be liked by all but I didn’t hate it. Sure, it could have been a lot better but was I entertained? Yes, yes I was. Perhaps I lowered my expectations a little when everybody told me they didn’t like it. Usually when that happens though, I just outright hate the movie but that wasn’t the case this time. Maybe I’m just a sucker for a fun dino movie.

Features:
On Set with Chris & Bryce
Return to Hawaii
Island Action
Aboard the Arcadia
Birth of the Indoraptor
Start the Bidding!
Death by Dino
Monster in a Mansion
Rooftop Showdown
Malcolm’s Return
VFX Evolved
Fallen Kingdom: The Conversation
A Song for the Kingdom
Chriss Pratt’s Jurassic Journals
Jurassic Then and Now

Bottom Line: Not that great but I was still entertained by it
Running Time: 129 mins
Rating: PG-13
Extras Rating:
Overall Rating: