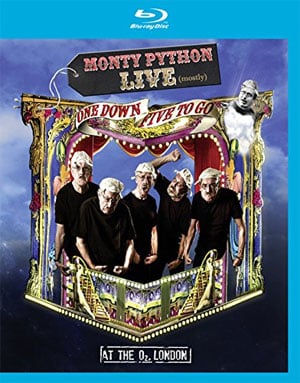 Monty Python (well most of them) reunited for 10 nights in London at the O2. The inevitable Blu-Ray and DVD are now out and for those that didn’t score a ticket to this or the theater showings, this is the next best thing.

These reunion concerts were the first time the group (well minus Graham Chapman) got together on stage in over 30 years. It’s probably going to be the last time they do something like this together again. At least that’s how it was being described. When tickets went on sale, they instantly sold out in a matter of a minute. Believe me, I should know since I woke up at 4am and tried getting some tickets. Only ones available for the concerts were nosebleeds or obstructed views, or the website was crashing. It wasn’t meant to be and figured I’ll just wait for the Blu-Ray, which is what I’m reviewing right now so it works out.

This Blu-Ray was filmed on the last day of their 10 day tour at the O2 in London. The concert is about 2 hours and 15 minutes long and it features a lot of the greatest hits. You have classic sketches like the dead parrot, the Lumberjack Song, nudge nudge, having an argument, the Four Yorkshiremen and the Spanish Inquisition. The sketches aren’t exactly copies of the original sketches and re-worked a little bit. The concert also features a lot of songs you might have heard in their movies and Flying Circus like The Galaxy Song, I Like Chinese, Christmas in Heaven, Every Sperm is Sacred, Penis Song and Always Look on the Bright Side of the Life. The songs were re-worked as well and included a lot of musical dance numbers. I loved the additional verses to the Penis Song, which were about vaginas and asses. No love for the breasts though? In between the bits on stage, they show us classic Monty Python bits on the screen so they can allow costume and set changing. No matter how many times I see the fish-slapping scene, it still makes me giggle like I’m seeing it for the first time.

For the most part, a lot of this stuff we’ve seen before. There were a few new sketches (at least I seem to think so) like Michael Palin and Eric Idle as judges that take off their robes and are wearing lingerie underneath. They were making fun of John Cleese’s divorces which was amusing. I was cracking up at the part where John Cleese was screwing up and didn’t know where he was in the sketch. That seemed to happen a few times. I always appreciate those moments in live comedy shows. Sometimes it’s funnier than the actual bits. For a lot of this, I had a big smile on my face but was laughing sporadically. It made me want to watch the episodes of Flying Circus and the movies more than anything. For this concert, there were a few special guests appeared on stage but I’ll save that for you to discover.

There’s a few special features that are included with the Blu-Ray like the reunion, the concert announcement, the behind the scenes of the production, and some other highlights from the concert that didn’t make it into this concert footage. Definitely worth watching after you watch the concert!

I’m glad they came back to do this and would have been cool to see them live finally. But even they admitted this was a cash grab to pay off court case bills, and their mortages. Eric Idle handle a lot of the directing and writing and did a great job with the production. It was funny to see huge dance numbers to these absurd, silly songs. It felt more like a tribute show more than anything. This Blu-Ray is worth buying if you’re a diehard like myself who was willing to spend a lot of money to fly to London to see them. I thought the concert could have been a little bit funnier and include more new material. But I treat Monty Python the same way as the Pogues, enjoy whatever they decide to do and take each concert/event one thing at a time. It’s all you can do. Now excuse me, my hovercraft is full of eels.