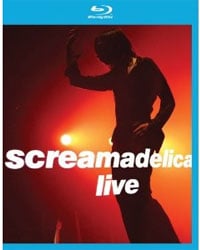 This Primal Scream Blu-Ray offers a great look at one of the band’s more recent concerts and you don’t have to stand in a sweaty crowd to see it! That’s always a plus!

Screamadelica was filmed in London at Olympia on November 26, 2010 and it was the first time the band performed their classic album Screamadelica live in its entirety. Beside the band, there’s also a gospel choir and a brass section to give the music an extra boost. In the background of show, there is films by artists Jim Lambie. They play songs like “Movin’ On Up,” “Don’t Fight It, Feel It, ” “Damaged,” and “Higher Than The Sun.” Besides the concert, there’s also additional 30 minutes of footage.

I’ll be honest, I didn’t really know the music from Primal Scream. I heard the name of the band tossed around here and there, and heard one of their songs on the Trainspotting soundtrack. I wouldn’t even know any of the band members if I fell over them. But I might have to check this out and their earlier work as well. This wasn’t really my thing back when the band hit their prime, but I can respect their music now. Some songs I liked better than others like “Don’t Fight It, Feel It” and “Damaged.” The songs towards the end of the set were a bit long and got boring for me.

The filming of the concert was okay, but I probably would have done things differently. Some of the quick cuts and angles seemed a little weird to me. The quality of the video is top notch though. Definitely a worth purchase if you like Primal Scream and didn’t get a chance to see this album played in its entirety.