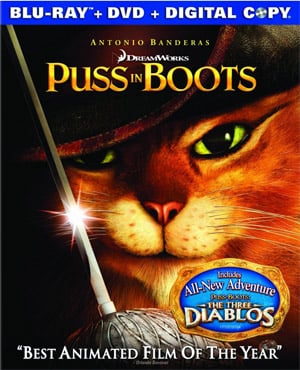 Puss in Boots is the latest movie in the Shrek series, except this is a prequel spin-off featuring Puss In Boots. The movie is enjoyable at times, but also a little boring. I tried really hard to like it but I just didn’t think this was strong as the earlier Shrek movies.

Before Puss in Boots (Antonio Banderas) met up with Shrek, Fiona and Donkey in Shrek 2, he was off on a get-rich adventure with his former partner in crime and mastermind Humpty Dumpty (Zach Galifianakis) and a Kitty Softpaws (Salma Hayek). Humpty Dumpty convinces Puss in Boots to take part in scheme to steal Jack and Jill’s magic beans. The beans will lead them up the beanstalk to get Goose’s golden eggs.

Puss in Boots is more in line with Shrek 3 and 4 than 1 and 2. There’s just something missing in this movie that makes this fall flat. I just didn’t care about any of the characters that much, well besides Puss. I laughed at all the kitty jokes like Puss drinking the milk, the cats chasing the flash lights, and other things like that, I just didn’t think anything else was funny or interesting. Well, that’s not true. I laughed when that one random cat went “oooooh” but besides Puss, that’s about it.

It feels like they centered the movie around those 1 or 2 jokes and it makes the plot/characters stretched thin. Originally, I thought Puss in Boots might be great stand-alone character but after seeing this I’m not so sure. The character is cute and funny, but it’s just something about this movie that makes me shrug my shoulders in unenthusiastic way. Honestly, this movie is probably more geared towards children than the Shrek movies were. Perhaps if Puss had a better story and supporting characters, this might have been better.

The Blu-Ray/DVD combo features a new short featuring Puss, some children related Blu-Ray features, featurettes on the voice-over acting, deleted scenes, and some other things. The new animated short takes place after the events of the movie. Puss has to deal with 3 kittens who are just as mischievous as he is. I liked it, and was cute. Kids should definitely see that one too. I didn’t really check out too much of the other extras.

Overall, Puss in Boots has a few moments that made me chuckle, but other than that, the movie falls flat. Maybe if I saw this again I would change my mind but really think the movie is geared towards children then children AND adults.