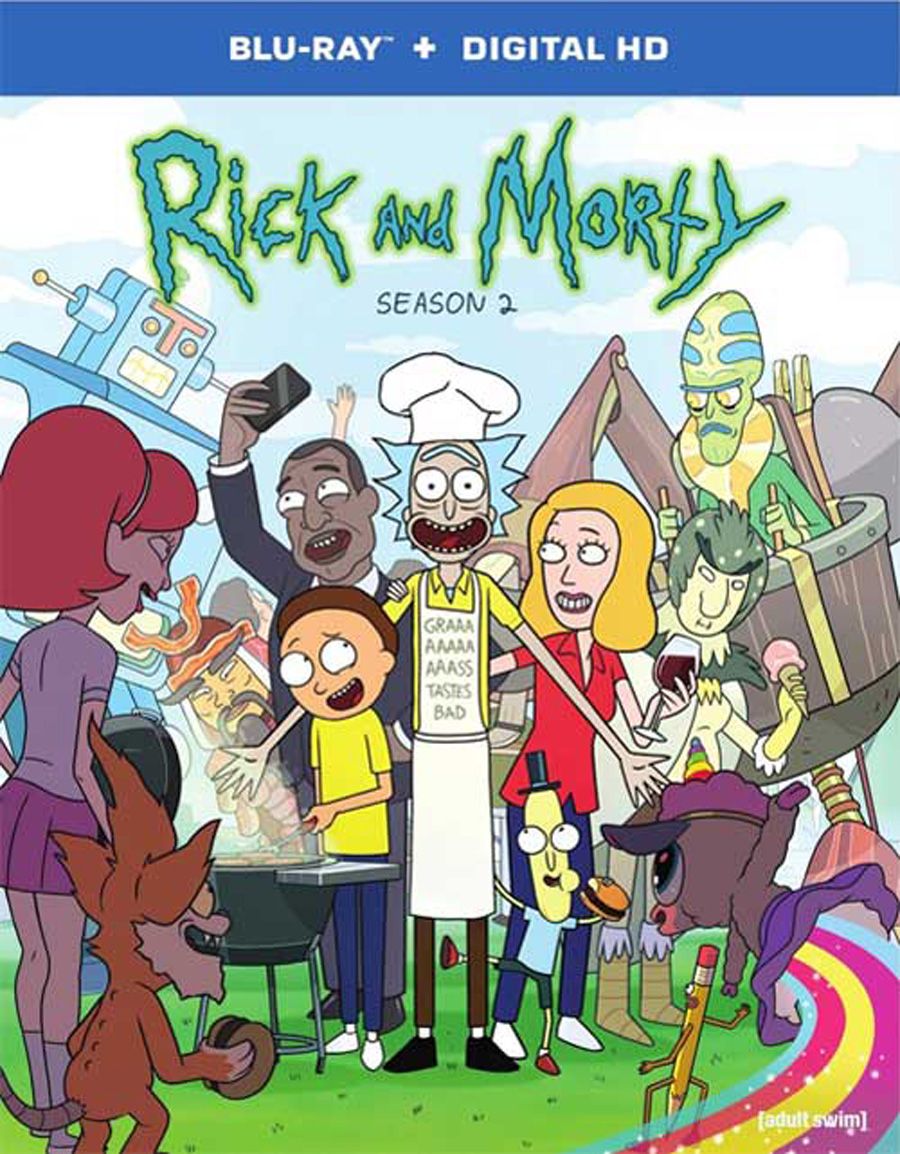 “Rick and Morty” follows the zany and extraordinary tales of a grandfather and his grandson as they traverse the universe all the while finding fun things to do together as well as spend lots of quality time together. Well…not really. That’s how Morty wishes things were but in reality, his grandpa Rick is an egotistical, self-centered, cold-hearted bastard that happens to be well traveled in many a galaxy. Season 2 finds Rick still living with his daughter’s family but this time around they get involved in plenty of his antics.

Until receiving season 2 in my hands, I have yet to watch a single episode of “Rick and Morty”. I never could get around to catching it on TV and it would usually get pushed to the back of my mind while perusing the movie sections but then some conversation or another it would come up and I would continue the cycle of remembering and forgetting about it again. Finally, with season 2 in my hands I could no longer escape my own forgetfulness and was able to watch through an entire season!

You may or may be not asking yourselves this question…what were my first impressions and initial reactions? Well I’m going to tell you whether you want to know or not. If not, please skip to the next paragraph. First off, I know that some of the Adult Swim stuff pushes the M rating and I wasn’t quite sure where “Rick and Morty” fell in regards to that. I know now that it’s definitely not for kids because within the first few minutes of watching there were a few F bombs and swears abound. There’s a heavy dose of blood and gore depending on the situation but it doesn’t push the boundaries. The same can be said of the cursing throughout the show…it’s usually out of the blue and comedic. There are almost no sexual undertones or nudity which leaves the show as something that isn’t any more vulgar or violent as just about any late nite TV show. I also didn’t realize that one of the shows co-creators (Justin Roiland) was the creator of one of the greatest animated internet pieces of all time…the “House of Cosbys”. If you have never seen the “House of Cosbys” before, then go now and search the deepest darkest reaches within the underbelly of the internet for it. You may or may not be disappointed with it. I know I sure wasn’t.

As I mentioned before, Rick is kind of a self-centered, egotistical asshole…as are most mad scientists. I’m typically not a fan of those types of characters, but Rick’s antics are totally something that I would do if I was just sick of everyone and traveled the universe on my own for years only to become more and more distanced from every sort of emotion or connection to anything. Things like creating a microverse just to power a car battery and telling the denizens of that microverse that the middle finger is a universal greeting of peace or wanting to take a front row seat in the sky of a planet that commits a planetary purge once a year just for kicks. Morty always tries to balance out Rick’s chaotic neutral alignment with the moral high ground but he usually manages to get unwillingly dragged into his schemes one way or another.

A few of my favorite episodes would have to be “Total Rickall” where the house is on lockdown after intergalactic parasites are brought home on someone’s shoes. The parasites trick the family into believing that they’ve known the parasites all of their life. You get introduced to characters like Sleepy Gary, Reverse Giraffe and the ever-so-loveable Mr. Poopy Butthole. Chaos and laughter ensues. Another personal favorite would have to be “Get Schwifty” where Earth is part of an interdimensional gameshow in which Rick must produce the worlds’ greatest song. You also get to learn the secret origin of Ice-T.

When it was all said and done, I would have to say that season 2 definitely made me a fan of “Rick and Morty”. Not only was it full of weird and quirky sci-fi humor but it also had its fair share of pop culture references, over-the-top moments and WTF scenes. You never quite knew what to expect from minute to minute…episode to episode, and that’s what made the adventure so much fun. For me, Rick is definitely the star of the show, but his family as well as the abundance of crazy and unique supporting characters such as Bird Person and the Third and Fourth-Dimensional Testicle Monsters always managed to keep things interesting. One could compare this show to a mature version of Futurama where Professor Farnsworth is allowed to just let loose. It pushes quite a few boundaries but in a fun and satisfying manner. And also, don’t forget to dig up the “House of Cosbys”! Graaaasssss tastes baaaaaaad!

Audio:
English 5.1 Dolby Digital
English SDH Subtitles
Bottom Line: While seasons of “Rick and Morty” only run roughly ten or eleven episodes deep, there is plenty of variety and chaos that manages to ensue over the course of roughly four hours. I now know what I have been missing and I’m a better person for it. Now bring on season 3 (as well as my delivery of season 1)!!!
Running Time: 220 Mins
Rating: TV MA
Extras Rating:
Overall Rating: