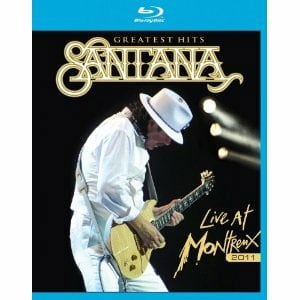 Santana’s newest live performance is available on Blu-Ray and DVD from Eagle Rock Entertainment. The concert was filmed in Montreux, Switzerland last July and features the lead guitarist and bandleader Carlos Santana. The concert also features Susan Tedeschi, Derek Trucks and Cindy Blackman-Santana. While I’m not a Santana fan, fans of the legendary Latin guitarist will want to buy this one!


I figured I’d give this Blu-Ray a shot, and still ended up not liking it just because I don’t like Santana’s music. I think he’s a phenomenal guitarist, but a lot of the music still bores me to death. Even the popular songs from Santana, I prefer other classic rock bands to Carlos Santana.

About the only song I can tolerate in Santana’s collection is “Black Magic Woman / Gypsy Queen.” When watching this, and maybe Santana fans can even back this up, but felt like watching a cover band play these songs instead of actual Santana. That’s the overall feeling I got when watching this.

The video itself looks great. I like all the camera angles and stuff like that but the music is just boring to me. I don’t like bands that go off on guitar/drum solos for hours, and that’s what I generally think Santana’s music is basically about. When bands do that, I just want to scream “GET ON WITH IT!!” But if you’re a fan of Santana, give this a shot.