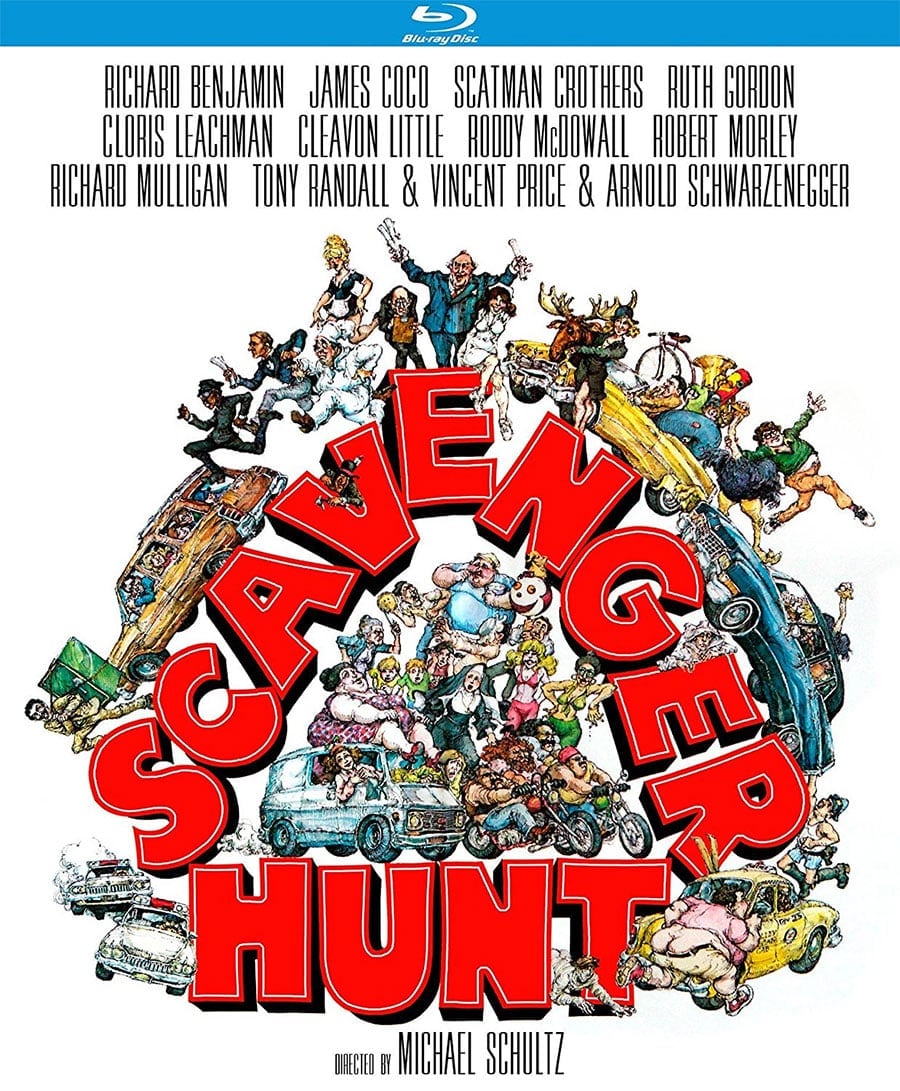 Scavenger Hunt has been out of print for about two decades or longer it seems. Fear not fans, it’s now available on Blu-Ray & DVD for the first time! The all-star comedy is an underrated movie from late 70s and worth seeing if you like zany comedies like It’s A Mad Mad Mad Mad World, Rat Race and Brain Donors.

The movie starts out with Milton Parker (Vincent Price), a kooky game inventor dying while playing one of his games. His relatives & staff, some of them quite greedy, show up at his mansion for the reading of his will. The lawyer tells everybody that they must compete in a scavenger hunt that has to be done by 5pm in order to get the 200 million dollars estate. There are five teams which include Parker’s widowed sister Mildred Carruthers (Cloris Leachman), her attorney Stewart Sellsome (Richard Benjamin), and her son Georgie (Richard Masur); Nephews Kenny (Willie Aames) and Jeff Stevens (Dirk Benedict), and Mildred’s step-daughter Lisa (Maureen Teefy); taxi driver Marvin Dummittz (Richard Mulligan); Parker’s son-in-law Henry Motley (tony Randall) and his four children and The servants French cook Henri (James Coco), valet Jenkins (Roddy McDowall), limo driver Jackson (Cleavon Little) and French maid Babbette (Stephanie Faracy). The first team with the most items on the list, wins the 200 million!

It’s been a long time since I last saw Scavenger Hunt but I used to watch this all the time in the 80s and early 90s. My brother and I ended up buying a VHS tape of that back in the late 90s, since the VHS tape was even out of print. I can’t even remember how much it was but it wasn’t exactly cheap. I’ve been waiting for this movie to come out on DVD or Blu-Ray for 2 decades pretty much. Thanks to Kino Lorber for releasing it! Not sure why this movie was such a pain to release since it has an all-star cast, it’s funny and used to be on TV all the time. I consider it a cult classic because there’s a cult following and people willing to spend money to see it. Plus it’s just an amusing movie.

Richard Benjamin and Richard Masur hating each other and beating the crap out of each other was just some funny stuff. I still laugh out loud when Richard Benjamin and Cloris Leachman are chasing each other around when they are trying to load in their stuff. Masur’s character was a favorite for me though because he’s a man child. Him screaming “Buzzy!” still sticks with me to this day. Cleavon Little, James Coco, Roddy McDowall and Stephanie Faracy all played off each other well too. Loved seeing Cleavon in this movie since I’m a huge Blazing Saddles fan. This was a few years after.

Tony Randall’s character and storyline was always the weakest link, which is a shame since he was a funny actor. Richard Mulligan stuff was hysterical too because he’s so stupid in it. I always crack up when he dresses up as a mummy and Scatman is in armor at the museum. You got Dirk Benedict and Willie Aames in this too, but they didn’t really have any special moments in the film. They are the people you root for, not to laugh at. The cameos in this movie were pretty good too, I mean how can you top one of Arnold Schwarzenegger’s first English speaking roles as a gym instructor! Then you got the Scatman Crothers, Meat Loaf, Stuart Pankin, Liz Torres, and Vincent Price was essentially a cameo too.

The Blu-Ray looks decent for a movie from the late 70s. There’s noticeable grain but hell, beats having to watch this on fuzzy VHS. The Blu-Ray features audio commentary with director Michael Schultz, interviews with actors Richard Benjamin and Richard Masur. I didn’t listen to the commentary yet because I wanted to watch the movie from start to finish, since I haven’t done that in ages. The interviews with Richard Benjamin and Richard Masur were good because they were 10 minutes each. Each actor talks about what worked and didn’t work on the movie, and their experience they had with the filming. It’s interesting hearing their take on things and kind of wish there was something longer. Still, I’m surprised Kino Lorber got this much bonus material so I’m happy with everything on this disc!

Scavenger Hunt still holds up well to this day and is an underrated wacky comedy. The slapstick humor and dialogue is still funny and the cast is just cast in this. I’m so happy I can finally watch this a bunch of times without having to break bank on spending a ton on a crappy VHS tape. If Kino Lorber wants to release The Hudson Brothers’ Hysterical on Blu-Ray next, that would be awesome!