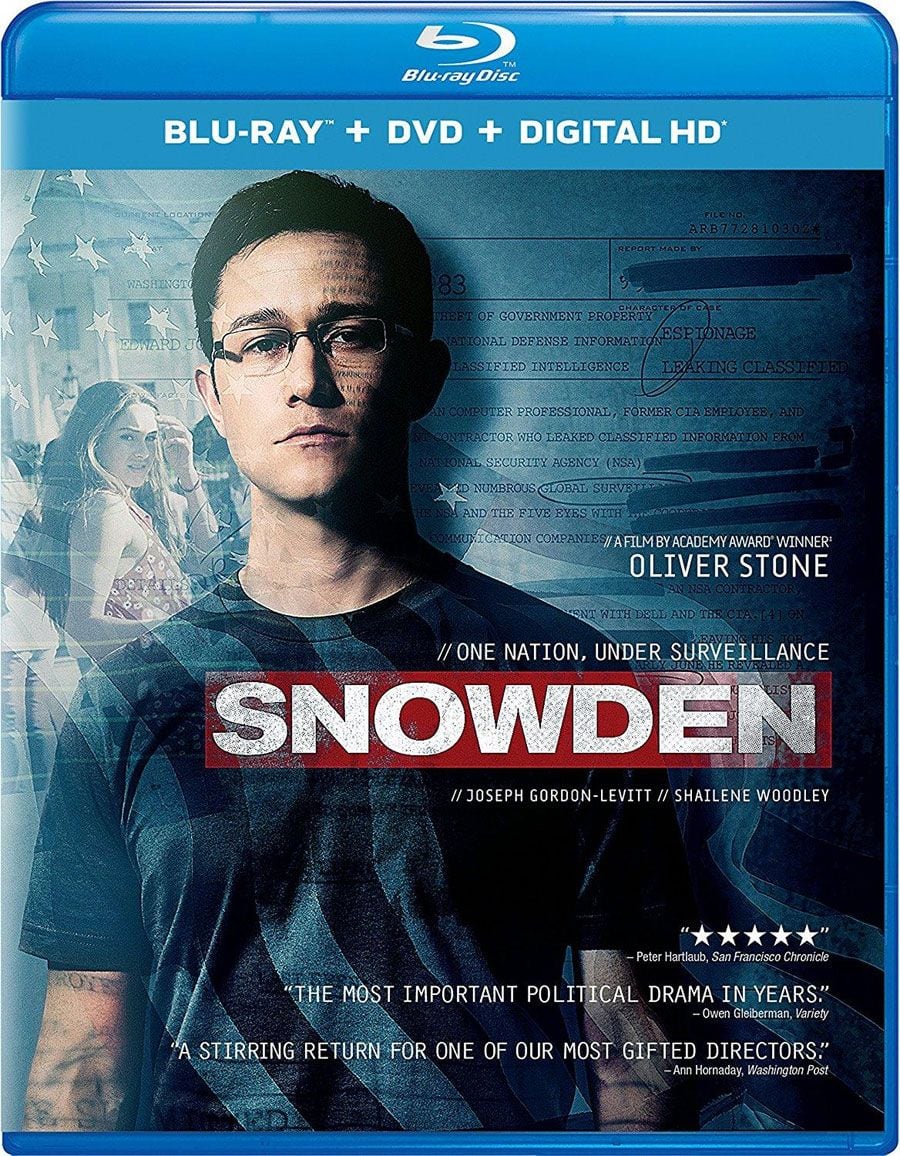 We all know the story of Ed Snowden…or should anyway. You probably also saw the Snowden documentary Citizenfour so it was only a matter of time for someone to dramatized the story. That person is Oliver Stone, who I think is the perfect director for the job. The story is gripping at times, and I enjoyed it. With that said, I still thought it could have been a little better.

Edward Snowden (Joseph Gordon-Levitt) meets up with documentary filmmaker Laura Poitras (Melissa Leo) and journalists Glenn Greenwald (Zachary Quinto) and Ewen MacAskill (Tom Wilkinson) in Hong Kong in 2013. Snowden has classified documents about the NSA, doing illegal mass surveillance conducted by the NSA and they discuss on what to do with them. Snowden reflects on what got him there with Laura and the movie shows what happened 10 years prior. Snowden starts out in the Army but gets discharged. He then works for the CIA for a little bit. During all of this, he meets Lindsay Mills (Shailene Woodley). She has different political stances than Ed does but the two still hit it off. Throughout the movie, you begin to notice a shift in Snowden’s thinking about the government. After seeing what the government was doing with their massive illegal mass surveillance program, he decides the world needs to know about this.

I think what Edward Snowden did was a fantastic thing, think he’s very smart guy and hopefully one day he’ll be allowed to return to the US as a free man. I thought Snowden the movie was decent. It was interesting to see what he went through in the last 10 years. I’m sure a lot of this stuff was added for dramatic effect and Hollywood-ed up but you get the general idea what happened. The Rubik cube thing towards the end of the movie was added for dramatic effect, although Snowden doesn’t confirm how he smuggled out the data in the extra’s Q&A.

For the most part, I thought Joseph Gordon-Levitt did an excellent job as Snowden. I really don’t think the deep, robotic voice was needed though. It bugged me in the beginning but I got used to it. He could have just talked like himself and we still would have gotten the idea that he was Ed Snowden. Nitpicking aside, he still did a good job with the role. It wasn’t surprising to see Shailene Woodley in this, considering how she is with protesting, rallies and things like that. My kind of actress! Call me crazy but loved seeing Nicolas Cage in this and wish he was in it more. I miss him being in legit movies instead of these straight-to-video, pile of crap he’s been appearing in lately.

This isn’t the best Oliver Stone movie but it’s not his worst. I still think he was the perfect director for this material but something about it; the movie could have been better in areas. The best parts of the movie is when Ed is with the journalists in the hotel room, and when he was with Nicolas Cage and Rhys Ifans’s characters. The ending where everybody is kind of cheering on Ed, watching the news felt really cheesy. I’m surprised I didn’t see someone do a slow-clap for him at one point.

The Blu-Ray extras contain some deleted scenes, a 3 minute fluff featurette and 40 minutes Q&A with Edward Snowden, Oliver Stone, Joseph Gordon-Levitt and Shailene Woodley. The Q&A was the best part of the bonus features because you got to hear a little bit how they approached Ed, what was added into the movie and things like that. Just listening to Ed speak, you can tell he’s just a very smart guy and has a lot of great things to say in the process. The deleted scenes weren’t that special and didn’t add anything to the movie. I could see why they were cut. I wish there was a proper behind the scenes featurette though.

As much as I liked Snowden, I still prefer Citizenfour to this because you’re watching the real thing. While Ed’s life is interesting in how he got where he was, the parts you want to see is Ed talking about surveillance, politics and the government with Laura.