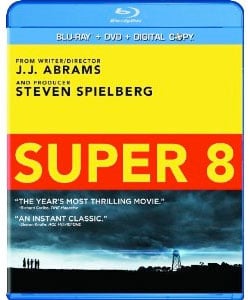 Super 8 is J.J. Abrams’ answer to Close Encounter of the Third Kind, E.T., and even a little bit of The Goonies thrown in there as well. The movie is fun, suspenseful, thrilling, and should bring back a lot of memories of your childhood…just minus the whole alien attacking your town thing.


The movie is set in 1979 in a small Ohio suburban town, and centers around a group of young filmmakers. The main kid in the group is Joe (Joel Courtney), who lost his Mother recently. His Father, Jackson Lamb (Kyle Chandler), who’s also the deputy, is still coping with the death as well. He blames Louis Dainard (Ron Eldard), who was absent during a shift where Jackson’s wife had to fill in for him. Meanwhile, Louis’s daughter Alice (Elle Fanning) begins working on Joe’s friend Charles’ (Riley Griffiths) zombie movie and they decide to go film at a train depot late at night. Everything goes fine at the start of filming until they witness a big train derailment. Everyone is okay afterward but they learn that something else is at play. They begin to piece clues together that an Alien was on board the train. After that, things start getting crazy in town, people go missing or dead, and that’s when the Army comes in.

J.J. Abrams’ movie is entertaining and a bit nostalgic for Steven Spielberg directed/produced movies like the ones I mentioned above. It makes me want to go out and make movies with my friends, but kind of hard to do that now that I’m an adult. In college, I did a lot of filming and video making but not to this extent. I felt the story wasn’t entirely too original but just felt like a tribute movie to Spielberg the entire time. Honestly, with Abrams filmmaking and Michael Giacchino’s score that’s paying homage to John Williams, it’s very easy to think you’re watching a movie by Spielberg. He did produce it after all but still, felt like he directed it as well.

I thought the casting was great, and the kids did an awesome job. They weren’t those annoying young movie actors that will make you not want to watch the movie. It was something real about the way the kids acted and the way they looked. I honestly would have just liked seeing these kids trying to make a zombie movie the entire time. Would have been The Sandlot of horror filmmaking. The whole alien plot was okay, but felt like an updated version of E.T. at the end, except this alien killed and kidnapped people. No Reese’s Pieces eating and beer chugging from this alien. The ending was a bit silly and kind of wished it ended differently. Haven’t we seen this type of ending before, in a few different movies?

Another big complaint I have with Super 8 is the overload of lens flares. It got to the point that some scenes were unwatchable for me, particularly the train depot scene. I really don’t know why J.J. Abrams decided to put all these streaks into the movie because it’s distracting and just obnoxious. He did it for Star Trek but not to this degree. Watch the train sequence and you’ll notice what I’m talking about. Other than that and the E.T. like ending, I really enjoyed Super 8.

The Blu-Ray has over 2 hours of bonus materials and it’s fantastic! There’s 8 featurettes which you can watch separate, or all together to make up over an hour and half worth of behind the scenes. There’s a bunch of deleted scenes, audio commentary, and couple other things. The featurettes were very in-depth and broken down on the kids, Joel Courtney, the score, special effects, location scouting, and Larry Wang, who was the Director of Photography and also a skilled magician. He was so awesome that he even fooled Tom Cruise, who was visiting on the set. If you got the time, watching the 8 featurettes is a must! The deleted scenes were decent but I could see why they were left out.

Overall, Super 8 is a lot of fun but it has it’s faults. That’s not to say you shouldn’t see this but don’t go expecting a flawless movie. I really liked the movie but just not all the damn lens flares/streaks!