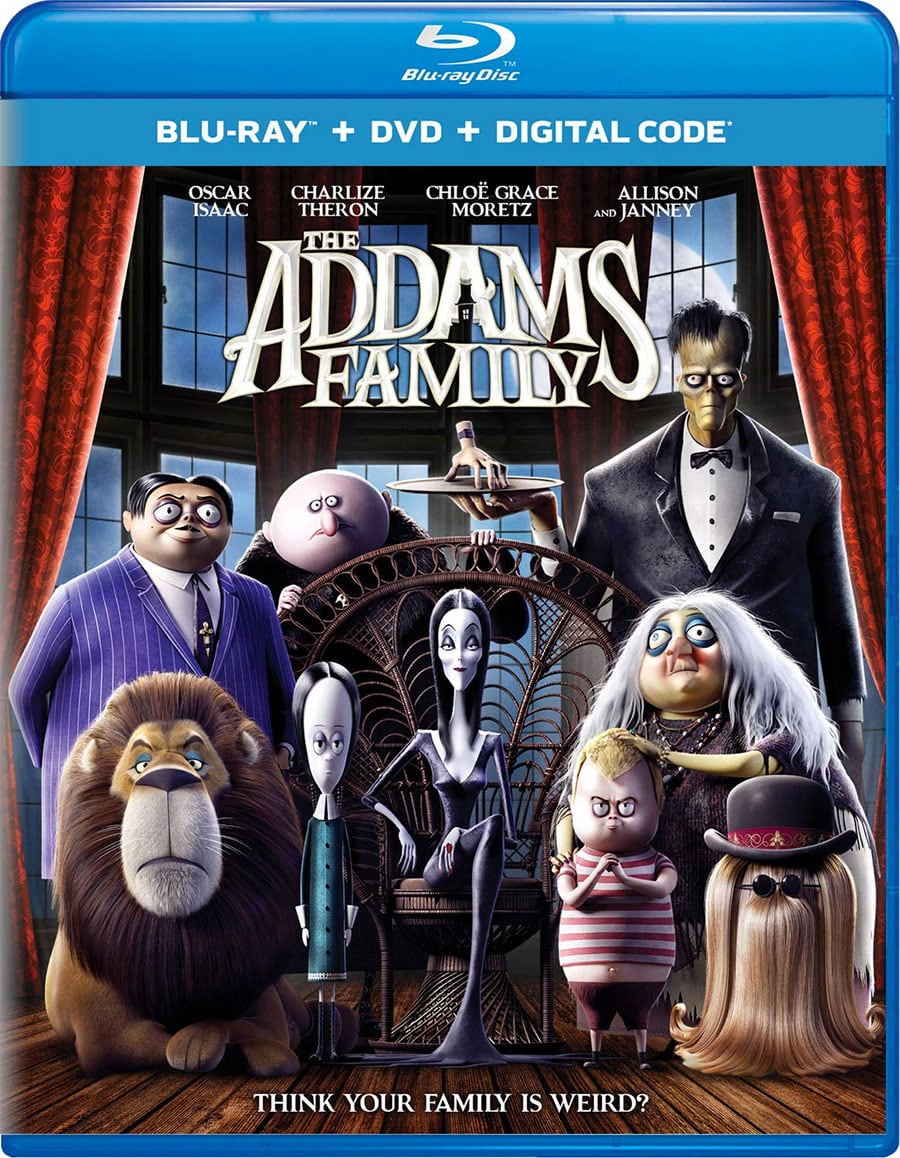 I was very, very cynical about an Addams Family reboot. I absolutely love the movies from the 90s but thankfully, I really enjoyed this animated reboot as well.

The movie is a reboot and a bit of an origin story in a way of the classic Addams Family, based on the old cartoons from Charles Addams. Gomez and Morticia Addams (Oscar Isaac, Charlize Theron) get married with their family present, but are chased away by an angry mob who aren’t fond of them. Gomez, Morticia, Uncle Fester (Nick Kroll) and Thing escape and decide to move to a place that is corrupt and no one would be caught dead living in, New Jersey. They find a run-down abandoned insane asylum to call “home.” Over time, they have children Wednesday (Chloe Grace Moretz) and Pugsley (Finn Wolfhard). Their lives are turned upside down when a reality TV host for a makeover show wants them gone from their home since their house is such an eyesore.

I watch Addams Family and Addams Family Values every October for Halloween time. They are such underrated Halloween classics. I was never into the TV show or the animated series but I love those movies. I wanted to see a reboot of Addams Family, but as a live version and not an animated movie. I went into the movie with an open mind but weary and ended up liking the movie a lot. It was quirky, silly, had some of that dark humor that Addams Family is known for. I think it will appeal to both parents and kids; I know my family liked it. Is it the best thing in the world? No but I enjoyed it enough that I would watch this a lot and would be open to seeing a sequel for this (which I believe is scheduled in 2021).

When I saw the trailer, I was skeptical and I saw a lot of outcome on the way Gomez and other characters looked. They look very similar to the way Charles Addams drew them so I have no complaints there. I feel like this is the type of movie where I will watch it a few times and find new jokes that I missed the first time around. That’s how the other Addams Family movies were. They just got better over time. I thought the cast was good for the most part. Liked Oscar Isaac and Charlize Theron as Gomez and Morticia. Chloe Grace Moretz was great as Wednesday and Finn Wolfhard, who’s been in everything lately, was okay too. I didn’t really like Nick Kroll as Uncle Fester and thought the voice was annoying. Snoop Dogg as Cousin It was hilarious (for the brief scenes he was in) because you can tell it’s him. The filmmakers sped up, and flipped the dialogue backwards or something to make it sound different though.

The extras were a little weak and didn’t really offer too much. There’s a few deleted scenes that weren’t finished, there’s a quick featurette where you play charades with Thing, lyric videos and there’s some other small featurettes. The Welcome to the Family featurette was the best even though it’s just a few minutes long. The cast talk about their characters and the crew discussing making it. Very generic EPK type of interviews and presentations. I would have loved to have seen in-depth making of the movie, with the actors voicing their characters and animators working on things. You get some of that in Life of a Scene but would have liked to have seen more.

The reboot of Addams Family isn’t live action but that’s okay, this new one is decent and should please most fans of the macabre family. I liked the animation, the jokes were funny and I feel like this will be a movie that I’ll watch multiple times with my family. Can we get a Camp Chippewa in the sequel too?