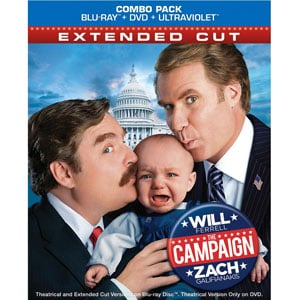 Having Will Ferrell and Zach Galifianakis in a movie together seems like a funny idea, and what do you know, it is! The Campaign is not only funny, it’s also a great satire on the politics and how slimy it can get.

North Carolina Congressman Cam Brady (Will Ferrell) of the 14th District is running unopposed again. He’s a bit of a moron who keeps getting into trouble. Corrupt businessmen brothers, The Koch Brothers, err, I mean The Motch Brothers (John Lithgow, Dan Aykroyd) decide to use Brady’s latest scandal to their advantage and get someone into office that will help them out financially. They convince a naive tourism director Marty Huggins (Zach Galifianakis) to run against Cam Brady. As the election gets closer, the mud-slinging and baby punching gets worse and worse.

The Campaign definitely has a lot of funny moments and is worth seeing if you like the two lead actors. I’m a fan of both, more so of Will Ferrell so I enjoyed this one a lot. I actually think the best moment of the movie wasn’t from either actors, it was from the Huggins family children when they were confessing their sins at the dinner table. I thought most of the funny stuff came from Will Ferrell though. There are a lot of great lines in this movie; ones I’ll probably be quoting for awhile. A lot of the stuff in the movie is unbelievable but makes for a good comedy. A drunken congressman stealing a cop car? Makes for some funny scenes though. But there’s also a lot of stuff that probably does happen, like businessman picking candidates that want to run because they will be best for their business/investment.

The Blu-Ray has 3 featurettes: line-o-rama featurette, 15 minutes worth of deleted scenes and a gag reel. The line-o-rama had me in tears with all the different versions of lines they were delivering. All the different smack talk lines were hysterical. I can never get enough of Mom trash talk. Definitely worth watching that and the rest of the special features after the movie.

This movie isn’t necessarily as funny as Step Brothers or Anchorman but is really funny and a good satire on the election process & campaigning. This Blu-Ray comes out at a perfect time when we already saw our fair share of laughs and awkward moments with the real debates. Check it out before (and after) the election happens, it will lighten the mood if your candidate doesn’t win.