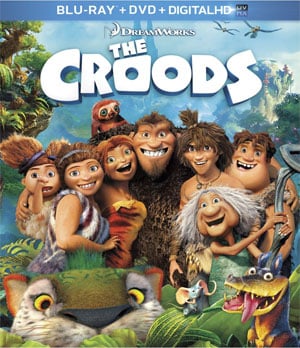 If you got little ones around, you probably already saw The Croods but if you haven’t, then you’ll probably be seeing this in the future. The Croods is about the last surviving prehistoric family and has its moments, but in the end, this movie feels a bit generic.


The Croods are one of the last surviving prehistoric families, as everybody else was killed off in various ways. A fun light-hearted thought to start a movie right? The Croods have fun throughout the day, like playing games and running for their lives from dangerous creatures. Oh what a blast! When nighttime comes, they go back into their cave and aren’t allowed to leave. Grug (Nicolas Cage) warns his family each night that exploring new things isn’t a good idea and it will get them killed. Grug’s daughter Eep (Emma Stone) doesn’t like that idea and decides to escape one night, where she meets a boy living on his own name Guy (Ryan Reynolds). The next day, the Croods home is destroyed and have to flee and discover a new world they haven’t seen before.

Believe it or not, The Croods was co-written by John Cleese…well the original story. Later on it was re-written with probably more of a family-oriented vibe to it. I’d imagine the story Cleese wrote was darker, funnier and not so movie cliche. I didn’t hate The Croods but I thought it could have been better. There was nothing wrong with the acting or anything like that, but just didn’t really get invested in the characters or the story. I don’t think children will have a problem with this movie though, which is their target audience obviously.

I thought the animation was good for the most part. I wasn’t crazy about the character designs or some of the creatures but the landscapes were beautiful. But in the end, I just think this movie would have been better with a bit of fine-tuning and a better story. I still prefer How To Train Your Dragon and the Shrek movies if I had to pick other Dreamworks movies.

The Special Features include a couple of featurettes like an introduction to the creatures in The Croods, some deleted scenes, and a featurette on how to draw certain characters. The deleted scenes were okay but could see why they were deleted from the movie. I liked the animation featurette since it’s almost zen-like watching animators draw for awhile.

Overall, The Croods is a decent family movie but I thought it could have been a lot better. Maybe the movie John Cleese originally intended to make with Aardman Animations would have been better & darker? But then again, this movie is kind of dark that the world around them is being destroyed. Way to freak out the little kids Dreamworks!