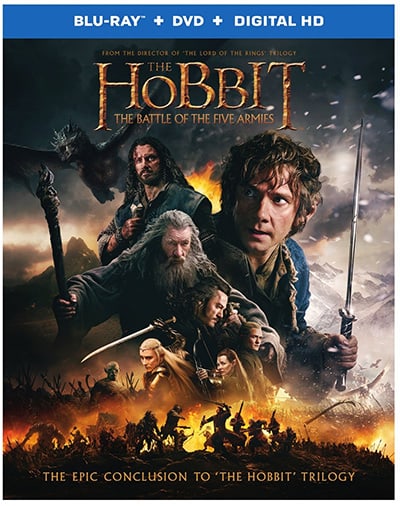 The final movie in the made-up Hobbit trilogy is here. The Battle of the Five Armies has its fun moments but the problem with the movie and the majority of The Hobbit is the amount of unnecessary bloat.

The movie picks up right where it was annoyingly cut off during The Desolation of Smaug. Smaug is wrecking havoc on Lake Town, killing people and burning down the entire town. Once that’s quickly taken care of, Thorin becomes an even bigger dick than he was and starts to become like his greedy ancestors. This pretty much almost causes a war between the citizens of Lake Town and The Elves, while Gandalf and Bilbo are stuck in the middle of it. Then all the Orcs decide to join the party and then the rest of the movie is just one big battle.

I’ve been a fan of all these movies and The Lord of the Rings but I’ve definitely had some complaints with them. I really question some of the thought-process on what Peter Jackson was thinking with some of the things in this trilogy and particular, certain characters. Some of the things they added that weren’t in the books that improved the storylines: Tauriel/Kili thing, I loved the Galadriel, Saruman, Elrond helping Gandalf scene, and loved the character depth of Bard.

What the hell were they thinking when they decided that Alfrid is someone they wanted to focus on? That character is a scumbag and should have died with the Master back in Lake Town. They just kept him around the entire movie and not providing any laughs, which they thought he was doing. It didn’t work, he was an asshole and his character isn’t seen dying on screen. Can I hope that he dies in the extended edition? What’s the point of him being in the movie, or at least surviving the Smaug attack and the battle? I guess you can say the same thing about Legolas being in these movies but I didn’t mind that he was actually in these.

The whole Smaug sequence in the beginning was excellent but that should have been at the end of the second movie. It was such a cocktease to cut that out and put in front of the third movie. Or they should have just condensed all these things and made this into a 2 part movie and used all the extra stuff for the extended editions. Have 2 movies be 3 or 4 hours each in the extended editions. I don’t mind the length of the movies but the flow of The Hobbit trilogy didn’t work as well as Lord of the Rings obviously.

Another thing that annoyed me was how much these movies were about douche Thorin Oakenshield. He turns into an even bigger douche in the Battle of the Five Armies and makes it hard to give a shit that he died at the end. I cared more about the other dwarves that died. I felt the same way in the book. Richard Armitage is great though, it’s just the character that I dislike. If dwarves were going to be a big spotlight, many of them got the shaft besides 4 of them. You’d think a movie called The Hobbit, Bilbo would get more screentime instead he’s just becomes a bit character. 2 other nitpicks I had: what was with the forced linked between trilogies at the end with Legolas and his Dad. Oh by the way, check out this guy named Strider. That didn’t come out of left field or anything. The other nitpick that I hope gets corrected in the extended edition is Beorn in the battle. I was looking forward to seeing him rip apart some orcs as a bear. Instead he’s a cameo at the end; very weak!

Regardless of all my complaints, the movie has amazing special effects, and battles. Although, they could have used a little less CGI soldiers this time around. The beginning sequence is so damn impressive and the end battles were great. The cast is terrific even though their characters have issues. Freeman and McKellen are the standouts of course, but even Luke Evans and Graham McTavish as well. I wish we got more of James Nesbitt because he’s an excellent actor but in these movies he just becomes a few lines here and there character.

For special features, you know the drill by now. These editions of the movies are for basic movie-goers and the extended editions are for the hardcore Tolkien/Peter Jackson fans. There’s a couple of featurettes to hold people over until November when the extended editions come out. There’s the music video and the behind the scenes for that, a featurette on the extras of the battle sequence at the end and a few other things.

I still enjoyed the movie and the trilogy as a whole. The more I think about the movies, the more I find problems with it and maybe I should just let it go and enjoy them for what they are. I had major issues with the theatrical version of Return of the King as well but a lot of those complaints were fixed in the extended edition. Maybe the same will happen or maybe it will be worse?