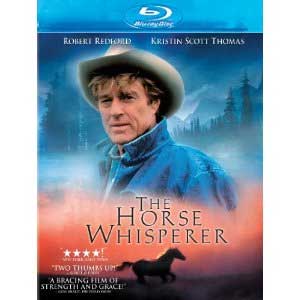 One of Robert Redford’s beloved dramas, The Horse Whisperer, is now available on Blu-Ray for the first time. I’ve never seen this film before, but I thought it was good. It was just too damn long.

After a tragic riding accident, a young girl Grace (Scarlett Johansson) and her horse Pilgrim are left emotionally and physically hurt. Grace’s Mother Annie (Kristin Scott Thomas) doesn’t want to put down the horse and wants to rehab it back to what it was. Grace is bitter and not her normal self after the accident, and Annie thinks someone can help her and Pilgrim out. She calls upon a rugged cowboy named Tom Booker (Robert Redford) in Montana who some have called a “Horse Whisperer.” He’s someone who is gifted with animals, but also has a way of connecting with people as well.

I’ve heard the film score for Horse Whisperer before, and I’ve seen maybe a scene or two but I’ve never seen the film from start to finish. I liked The Horse Whisperer, but just felt it was way too long. To get the core of the plot, they could have easily just have done this as an hour and half movie. I really didn’t know much about this film, because I didn’t even know that a young Scarlett Johansson was in this. Kate Bosworth also plays Grace’s friend as well. I didn’t even recognize her when I watched this.

This was beautifully shot by Redford, and really shows off the Montana countryside. I’d love to go there one of these days to just take photos. Of course, I could watch just a movie strictly about Robert Redford’s character instead of the main focus on Annie and Grace. Sure, we needed a story to get us over to Montana to see Tom Booker but for me, I’m more interested in his character mostly. I thought the love triangle was kind of unnecessary and really should have been about Grace, Pilgrim and Tom’s methods of bring the horse back to normal. But despite the few problems I had with the movie, it’s still a nice film to put on if you got a few hours to kill.

The Blu-Ray quality looks good and fans of the film will be happy it’s finally on Blu-Ray. It’s worth seeing it in Hi-Def just to see those beautiful Montana scenery. The featurettes on the Blu-Ray are from the original DVD and not remastered.