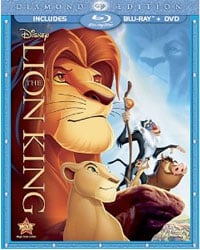 The Lion King is one of the newer Disney classics and it’s one of my favorites. In fact, it’s one of last Disney movies I really enjoyed that was made in the last 20 years that isn’t under the Pixar name. The Blu-Ray for this is just perfect!


The Lion King takes place at Pride Rock in Africa where lion King Mufasa and Queen Sarabi have given birth to baby Simba. Mufasa’s brother Scar hates Simba and Mufasa because he wants the throne of Pride Rock. Mufasa teaches Simba about being a lion and the circle of life. He has to save Simba from trouble a few times while doing stuff he shouldn’t be doing. Scar plots with the evil hyenas to get Simba and Mufasa killed so he can take over as King. The plan works for the most part, but Simba ends up being exiled and learning about the “circle of life” first hand. He meets a meerkat Timon and a warthog Pumbaa, who become his friends and teach about “hakuna matata.” That translates to no worries. Simba grows up and becomes a lion ready to take back pride rock. But he has to realize he’s ready and overcome the challenge of taking down Scar and the hyenas.

Lion King isn’t necessarily a children’s movie, despite all the singing in it. There is deaths and violence, and even some hyenas goose-stepping. I have no issues with that but I’m sure some parents might. I haven’t seen the Lion King in over 10 years so it was nice to see it again. I don’t like most of the singing like the can’t wait to be king song or scar’s song. Jeremy Irons just isn’t meant for singing but he sure can play the hell out of a villain though. The Hakuna Matata song is a really fun song, thanks to Timon and Pumbaa. Those two characters are perhaps two of my favorite Disney characters. So many funny lines from those two. The hula dance scene still cracks me up!

The Lion King is available for the first time on Blu-ray and Blu-Ray 3D. If you never knew when the the movie was released, you’d think the Lion King was released this year. That’s how clear and crisp the movie looks. Honestly, this is probably one of the best restorations I’ve seen on a movie, especially an animated movie! Everything looked so vivid and colorful on my LED TV. If there was a reason for families to upgrade to Blu-Ray, this might be it.

The backstage Disney stuff is the best things to watch in the special features. There’s a great featurette that has new interviews with producers, Matthew Broderick, Nathan Lane and others. Like with some Pixar movies, there is a funny blooper reel with the animals messing up their lines. It’s funny and kids should enjoy that. Besides those, there are some deleted scenes that haven’t been seen before, extended scenes, galleries, and some other featurettes.

Disney has done a spectacular job in upgrading The Lion King to Blu-Ray. I’m really surprised it looks this good. If 3D is your thing, that’s also available but I’m sick of it and don’t really want to see that anyway. Normal Blu-Ray is the way to go!