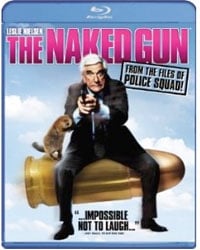 The Naked Gun is also available on Blu-Ray for the very first time. It can be purchased at Best Buy exclusively or I’m sure you can find it at Amazon.com as well. The Naked Gun is another favorite of mine, one that I have to watch every year when I could use a few (or hundred) laughs.

The movie is about Police Squad detective Frank Drebin (Leslie Nielsen), who tries to find who attacked his friend officer Nordberg (OJ Simpson). Nordberg tried to stop a major heroin operation at the docks and ends up getting shot numerous times. Frank and Captain Ed Hocken (George Kennedy) try to get down to the bottom of it, and grow suspicious of wealthy Ludwig (Ricardo Montalban), who owns the ship that Nordberg was shot on. Frank has 24 hours to clear Nordberg’s name and get down to the bottom of things. While that is happening, he falls in love with Jane (Priscilla Presely), an assistant to Ludwig.

It’s hard to decide which I like better, Airplane or Naked Gun. I might actually pick Naked Gun because I still remember how loud I laughed the first time I saw this when it came out on video (VHS at the time). This movie is the king of the sight gags and snappy one-liners. Blink and you missed something funny. Leslie Nielsen is just so good as Frank Drebin. Having a previously dramatic actor to play the complete opposite to that is the key to success with some comedies. They just have the range to do it all. The facial expressions or the way that Nielsen delivered the lines is just flawless. There’s just so many lines and scenes in this movie that still make me belly laugh like a baby. The opening scene, the theme song, OJ getting shot, the chase scene with student driver, and the baseball game scene. All of it is just hilarious! Naked Gun’s sequels were funny as well, but no where near as good as the original movie.

The movie itself looks decent on Blu-Ray. There’s a slight graininess or noise to the movie, but seems sharp enough that it might be a worthy purchase on Blu-Ray. The features are disappointing in that there’s nothing new. There’s just a trailer and group commentary, which isn’t new. Oh well, the movie is still worth the price.