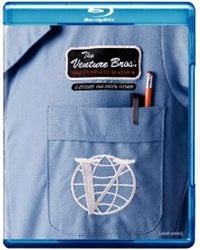 I tried to watch Venture Bros Season 4 when it originally aired but I just couldn’t stick with it. I’m glad to have finally seen the full season because it’s a good one!

Season 4 of The Venture Bros dealt with things like Dr Venture getting used to bad guy turned good guy Sgt. Hatred being his bodyguard, Hank taking Brock Sampson’s departure poorly, Henchman 21 getting more and more screen time and dealing with the death of his Ray Romano speaking buddy Henchman 24. The Monarch was dealing with Dr Girlfriend issues as always, The Phantom Limb escapes from prison and goes after Team Venture. Brock joins SPHINX with Shore Leave and Hunter Gathers. Just like every Venture Bros season, plots filled with super hero spoofs, kidnappings, dirty jokes and lots of laughs.

From only seeing maybe 2 or 3 episodes of the season, there was a lot of catching up to do. As much as I liked the previous seasons, season 4 is definitely as good as the first two seasons. Every time I decide to review Venture Bros, I always forget how funny this show is. I really need to go back and watch the first three seasons again. From what I can remember, this is also the filthiest and curse-heavy season which I fucking loved by the way! It’s something about cartoon characters cursing up a storm and talking dirty that makes Venture Bros just an original, hilarious cartoon show that stands out from the batch of animated shows. Sure, there’s South Park and Family Guy when it comes to cursing, but Venture Bros take it to the next level. Just watch the finale and you’ll know what I’m talking about. I believe you can watch the episodes (or at least the finale) censored but who the hell would want to do that?

The Blu-Ray is the way to go with Season 4 because not only does it not look the best in High-Definition, the entire season fits on one disc. The DVD was broken up into 2 volumes, which is always annoying; especially when you’re DVD shelves are already limited. The special features include a bunch of deleted scenes, an intro that was unused featuring The Monarch, some promos and commentary. Definitely worth buying if you own a Blu-Ray player!

Venture Bros Season 4 got the show back on track after a bumpy Season 3. As much as I liked Season 3, Season 4 was night and day better. I actually had tears from laughing at certain episodes, which definitely says something. No, I didn’t have something in my eye. The series is back and funnier than ever!