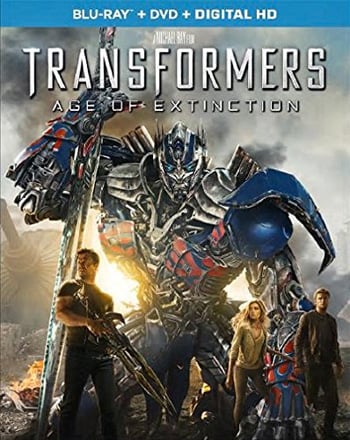 The Transformers series by Michael Bay has had a couple of cool things about it, but for the most part it has been a disaster. I liked the first movie but the rest have been pure muddled shit and Age of Extinction is no different. It doesn’t really matter what I say in this review because the movie and the franchise are and have been a commercial success.

5 years have passed since the Battle of Chicago and for whatever reason, humans aren’t happy with Autobots anymore and blame them for the destruction and death. an elite CIA unit, Cemetery Wind, is secretly hunting down autobots with the help of Lockdown, a transformer whose alliance is neutral. Meanwhile, struggling inventor (haha) Cade Yeager (Mark Wahlberg), who is from Texas yet sounds like he’s from Boston, has found a beat-up Optimus Prime and helps restore him. Cemetery Wind tracks down Cade and things go to shit on his property. Meanwhile (again), some company built their own transformers and plan on using it again the remaining autobots. And everything…ah who am I kidding, you gave up reading this already.

With Transformers movies, and especially Michael Bay movies, you have to turn off your brain. They are mindless entertainment but when this movie is almost 3 hours long, you know your head is going to be numb by the end of it. I was a fan of the first movie a lot, but the rest of the movies just haven’t been that great…even for mindless action movies. Some these are fun, and other times I’ll be watching and shaking my head at the same time. Let’s just say I would do things differently.

The Transformers in the past weren’t that distinguishable to other Autobots or Decepticons. I think he solved some of that this time for a few of the characters. The dinobots were highly underutilized and could have been really cool. Instead they are some plot device at the end of the movie and not great at all. The action in the movie is good but confusing and muddled at times, and the acting isn’t the greatest. We already witnessed another movie pass off Mark Wahlberg as a science teacher (The Happening) and now he’s an inventor/engineer? I literally laughed out loud when he kept talking about himself as an inventor. Plus, his character is suppose to be from Texas yet sounds like he’s from Boston. T.J. Miller had a few funny lines in the movie but he wasn’t seen for too long. His exit was really funny, though it wasn’t really supposed to be. I’m sure he was happy to not have to work with Michael Bay as long as the other actors.

I don’t know why Bay insists on continuing to use these stereotypical Autobots or bringing some back from the other movies. I thought that little annoying robot was killed in the last movie but I guess it was the other two idiot stereotypes. Other Bay signatures included in this movie: closeup of girls’ asses, no ugly people in the movie, car and military porn and his usually nauseating spinning camera moves. It’s cool the first time, but now it’s just irritating like lens flare that JJ Abrams uses. Maybe JJ Abrams guest directed some scenes because there was a lot of lens flare in this as well.

About the only positive I can say about this movie is how good the graphics & action sequences were. Unfortunately, we all know that when there’s good special effects and no interesting characters and plot, it doesn’t really matter in the end.

The special features of the movie include Michael Bay talking about action, and he just sounds like a pain in the ass. The guy knows his action, I’ll give him that. If only he was this passionate and excited about other important things like plot, characters and dialogue. There’s 2 hours worth of behind the scenes stuff and that’s awesome to watch if you like seeing how movies are made. There’s some smaller featurettes about some of the goofy things that happen on the set and T.J. Miller being T.J. Miller and harassing the cast & crew. There’s a whole bunch of stuff on one disc to watch after you sit through 3 hours of robots beating the crap out of each other.

Transformers: Age of Extinction isn’t that great and goes on for way too long, like this review. It has a few fun moments but I think it’s time for someone else to take the reins and re-tool the Transformers franchise into something more interesting and better.

Bottom Line: Not as bad as Revenge of the Fallen but that’s not saying much
Running Time: 164 mins
Rating: PG-13
Extras Rating:
Overall Rating: