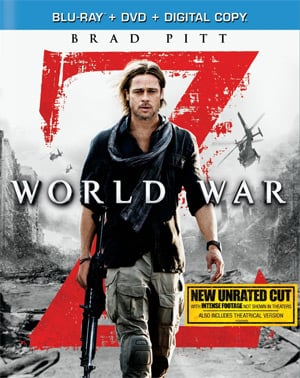 The world is getting zombie obsessed lately so I guess it doesn’t hurt to have yet another movie about them? World War Z is a bit different than other zombie movies because well, this has Brad Pitt in it! The movie is based on Max Brooks novel of the same name but from what I’ve heard, it seems a bit different than the book.

World War Z: the movie is centered around a former UN employee Gerry Lane (Brad Pitt) who seems to be a Jack Of All Trades. Gerry and his family are stuck in traffic in Philly (looked like Manhattan to me) when a zombie outbreak hits and causes chaos in the streets. They unsurprisingly manage to get out of the city okay and without hitting too much traffic when escaping. They end up in Newark, NJ and witness looting in the stores, which pretty much happens daily in Newark regardless of zombies or not. Gerry and his family escape just in the nick of time and get saved by his UN friends. In order to protect his family, Gerry is forced back into action and has to figure how this outbreak happened and how to stop it.

I originally had no desire to see World War Z because the amount of CGI zombies just made the movie look even sillier than it would be. The CGI zombies are there but they aren’t as bad as I thought. I think WWZ has its thrilling moments and succeeds in showing how chaotic things would be if this really happened. I’m kind of happy this wasn’t a huge gore fest like other zombie movies tend to be. So if you’re looking for that aspect, you’ll be really disappointed. The Walking Dead is far gorier and better but World War Z is just okay.

I didn’t like how the zombies were the fast zombies; ones where they were smashing into windshields and piling up like an ant hill. The zombie pile-on is what turned me off to the movie when I originally saw the trailer. It just looks stupid. Thankfully that’s just one scene because I would have turned off the movie it they were like that the entire movie. Unlike some other zombies movies, I liked they did find a cure or a way to battle the zombies. There’s obviously more for a sequel, which they plan on doing but not sure why they would rush to make another one given that this one is a pain in the ass to make. Re-writes, re-shoots and budget problems = fun! At least with me, I didn’t really notice those problems or they weren’t that evident.

I think in the end, with Brad Pitt starring and the popularity of zombies helps this movie be more successful than it really should be. When you think about, this movie feels like a piece meal job where there’s all these different scenes and someone just put a bunch of tape connecting them all. Essentially, the editor deserves the credit in the end because I think they make this work. Sure, the movie could have been better in some areas but I enjoyed myself with it.

The Blu-Ray has both versions of the movie so I suppose I watched the uncut version, which I can’t tell what was added since I didn’t see the movie in theaters. There’s a few featurettes about the movie that should interest fans of the movie. While they aren’t bad, they aren’t that memorable and probably just meant for the casual movie fan than the hardcore WWZ fan.

Fans of the book will be disappointed in this movie because what I’ve heard, it’s nothing like the book. It has the same name of the book pretty much. I thought the movie was enjoyable in parts but other times it was a bit silly. I think it captured the craziness of a zombie outbreak very well and the action parts were thrilling. Other than that, just watch The Walking Dead or a real zombie movie if you’re looking for the scary stuff.

Features
Behind The Scenes Featurettes: A Compelling Insider’s Look At The Creation Of The WWZ Apocalypse