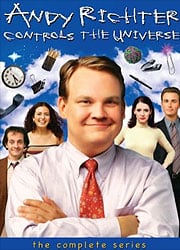 Andy Richter Controls The Universe was one of the funniest and wackiest shows when it aired. I’m still bitter at Fox for canceling so I can’t imagine what the cast & crew is thinking. The show is funnier than most shows on TV today and it finally some recognition from Paramount and CBS. If you seen this show at all and liked it, this is a no-brainer; you need own this DVD!

Andy Richter plays Andy Richter, but not the former sidekick to Conan O’Brien and the future TV Announcer for the Tonight Show. He plays a wacky writer that works at a big corporation, and writes “How-to” manuals. He shares an office with a co-worker Byron (Jonathan Slavin), who’s quite the eccentric and weird type. Andy’s good friend Keith (James Patrick Stuart), a good looking man who gets everything handed to him, works with him as well. Andy develops a crush on the new receptionist Wendy (Irene Molloy), but takes too long to ask her out so Keith jumps in and dates her instead. Andy and his boss & friend Jessica, tried dating once but that didn’t work out. She’s usually in the middle of things, having to take a side when it comes to issues with her friends and her superiors. Each episode finds the small knit group getting into a problem or situation, and then having to dig themselves out of it. The show features alternate realities and dream sequences, which at the time, not too many shows were doing. Or just not doing this as good as this show! Andy narrates the show, and makes us feel like we’re in his mind. This DVD set contains all 19 episodes from the series as well as some cool bonus features.

Andy Richter Controls the Universe is one of the shows I’m still pissed off that it was canceled. It got poor ratings but so did a lot of the shows that got their start. I’d imagine Seinfeld wasn’t doing that well in the ratings in the beginning. Fox is notorious for canceling great shows before their prime. They move the shows around a lot, they don’t promote the shows and they wonder why no one is watching. But whatever, it’s over and done with I guess. I’m just glad Paramount released this series on DVD because I forgot how funny it is. How this show didn’t succeed baffles me. The writing was excellent, and it had one of the better casts on a show this decade. You can tell a lot of them were friends off the set as well. Besides having a great regular cast, the show featured a lot of great guests like Conan O’Brien, Jon Cryer, Cedric Yarbrough, and Molly Sims. Conan’s episode was probably the funniest of the series.

This was the first thing that Andy Richter did after leaving Conan’s show. I thought he was excellent, and really funny. I don’t think he’s been in anything as funny since this series. I think once people since Andy Richter Controls The Universe, they are going to be surprised how funny this series was. The rest of the cast was great as well. James Patrick Stuart plays an arrogant, pretty boy real well. Paget Brewster I knew from guest appearances on Friends but this was the show I really noticed how funny she was. Plus I realized how gorgeous she was (or still is). Same goes with Irene Molly, who has her own folk band now I believe? Jonathan Slavin has been on other shows and I usually didn’t like him on there. But for this show, his style of acting and weirdness certainly fits with the show. I liked him as an actor after this show.

Besides getting 5 extra episodes that didn’t air, there are 2 great featurettes for fans of the series to watch. “How Andy Richter Controlled The Universe” was the best featurette, and was almost a half hour long. There were all new interviews with the entire cast. Even in the cast interviews, all the actors were really funny. “What If Andy Richter Controlled The Universe?” is a short featurette asking the cast that question. It has a few funny moments but not as good as the longer featurette. Rounding out the extras, Andy Richter and Victor Fresco did audio commentary on a few selected episodes.

If you like office comedy, and shows like Scrubs, The Office, News Radio and Spin City; you’ll really enjoy this series. I wish the series was longer but I’m happy that this is finally on DVD. The quality could be better in the video side of things but I can see why no one wanted to put more money into a show that only lasted 14 episodes. But with that said, this is definitely worth buying!