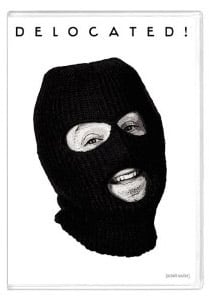 Never heard of this show but since it features some of the former writers of Late Night with Conan O’ Brien, I decided to check out the DVD of the first 2 seasons. It’s a outrageous, out-there concept of a show but works for the most part.


Delocated is a show about a family (“Jon,” “Susan” and “David”) that goes into the witness protection program after testifying against the Russian mafia. They move to NYC to be on a reality TV show and all the family members wear ski masks and have throat surgery to alter their voices for their protection. Just that sentence alone is why this show is so out there and quirky. Besides the family in ski masks, the show follows around a Russian hit man who also is a stand-up comedian.

Delocated airs during Adult Swim so the first season episodes are only 11 minutes or so. The second season episodes are around 22 minutes, the usual sitcom length. I actually think the show works better in the shorter time frame than the 22 minutes. Perhaps the first season is just that good that it works within that 11 minutes. Jon Glaser is really funny, and he was a stand-out on Conan’s show as well. As well as Kevin Dorff, who you might also know as the Coked Up Werewolf. For a tiny show, they seem to get some funny guests like Paul Rudd, Janeane Garofalo, and Todd Barry.

I thought the funniest episode of the series was Bar Mitzvah. Jon’s son is in a ska phase and has a Ska Mitzvah. Tons of ska references and puns ensue, it’s hilarious if you like ska music. The episodes in the second season start to get weirder and weirder for me, but the first season was really funny. Funny in the deadpan, dry sort of humor that the Office and other shows like that do. Honestly, the first season alone is perhaps funnier than anything The Office has done in the last 3 seasons.

I’m a little late to the game but think Delocated is a funny show, I just don’t think every one will like it.