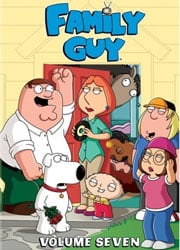 The latest Family Guy Volume is out on DVD and contains episodes from Season 6 and the first half of Season 7. This volume isn’t as funny as the other volumes but that doesn’t mean it’s not worth buying. If you like Family Guy, this volume will still make you laugh.

The first episode of the volume is “Back to the Woods,” features Peter’s villain actor James Wood. Woods seeks revenge on Peter by stealing his identity and family. Peter retaliates by ruining James Wood’s image. The next episode sees Brian finally putting his move on Lois. It’s kind of a weird episode, being that Brian is a dog ‘n all. Other storylines include: Peter steals a parrot and think he’s a pirate, Cleveland steals Brian’s chick away, Peter plays the song “Surfin’ Bird” over and over, Brian and Stewie rescue Goldman in Nazi Germany, the Griffins decide Brian is too old and they get a new dog and Peter gets injected with a “gay gene.”

This volume has its moments but it’s definitely not as good as the previous volumes. Some of the episodes are starting to get in the annoying zone. The one episode that comes to mind is the Surfin’ Bird episode which I have to fast forward when Peter starts singing that. Leave it to Family Guy to dig things into the ground but I guess that was the idea? One thing that pissed me off in this volume was the laziness of the writing. A lot of the same jokes being repeated over and over again. The last episode of Family Guy was really annoying because they re-hashed a bit they once did. When they cut to a Conway Twitty performance and it’s the entire performance! Way to go Family Guy writers, you didn’t have to write 3 minutes of material!

The last couple of volume DVDs has been 13 episodes which is kind of dumb since the earlier volumes contained more episodes for the same price. Would it do any harm to include full seasons instead of piece meal of seasons? I’m still happy with the Family Guy box sets, but wish they did it the old way. I guess the extras make up for lack of episodes on this set. There’s a bunch of featurettes including some funny deleted scenes, executive producer Danny Smith gives a tour of the offices, and video from last year’s Comic Con. It’s definitely worth watching the extras, especially the Family Guy offices tour and the art show featurette. It’s always cool to see footage from Comic Con since I never go to that. The deleted scenes were pretty funny, some cutaways & scenes falling short, some too harsh too put into the show. I thought the Jesus being a hand model was a hilarious cutaway but obvious they would have gotten a lot of hate mail for that one.

All in all, Volume 7 has some funny episodes like “Back to the Woods,” “Love Blactually,” “Road to Germany,” “The Man with Two Brians” and “Ocean’s Three and a Half.” I honestly think the writing and jokes are starting to get repetitive and lazy. I’m hoping the new season this fall is a lot better than this volume. With that said, if you liked the other Family Guy volume DVDs, this will be another one to buy!