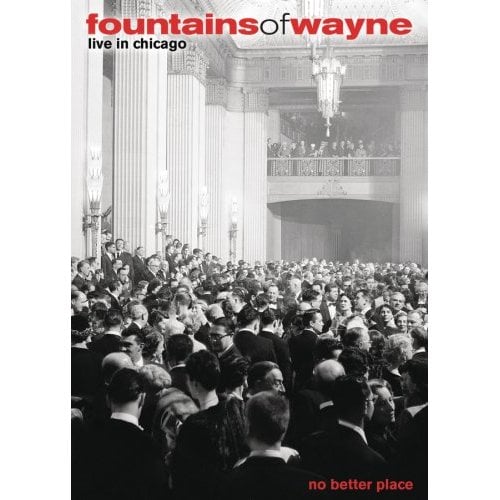 It must be exciting for die hard Fountains Of Wayne fans to finally get their hands on the bands first ever live DVD. When you hear it described as the band’s career defining performance with 5.1 surround sound that feels like your actually in the audience, the blood must be rushing to your head! Well I have only heard the bands music casually I must say I was expecting some fireworks and how does this thing start?

“Howdy”, says front man Chris Collingwood in a dry unexcited voice. But look at those bright lights and pristine stage, something great is about to happen I hope. About 30 minutes go by and they play six songs that all sound about the same and not once have the audience roared or has Collingwood even talked straight to them. It seems like he and the band are not even there. Are you not supposed to try and make your DVD performance one of your best? There’s no “hey everyone let’s make this good” said to the audience. From the looks of it the audience are just as robotic standing in the front row with their hands in their pockets, well most of those in the middle, back, and balcony sections of the theater are sitting and staring aimlessly.

All of a sudden a change in pace, or at least  it seemed all of a sudden since it woke me from dozing off. They played “Hackensack” which was more upbeat and actually sounded like Power Pop compared to to the snore fest they opened with. “Hey Julie” follows and the crowd started to tap there toes and a guy in the front row was getting a little crazy there for a minute playing the one handed drum as he slapped his knee to the beat.

Now comes a little commentary from Collingwood who is still talking to the ground. He introduces the next song describing how he moved from here to there and into “Valley Winter Song” they go venturing into an even slower uneventful three more songs. Oh and here comes the ever popular “Stacey’s Mom” which you might be ready to sing along to but you will find that it’s quite different from the album version and all hope is lost.

Sure they tried to make things action packed with all those professional wide camera angles and cuts from this guy to that guy but really it was like watching an early season of American Idol with those horrible bright lights and that overly flashy stage. Even the loads of LCD monitors plastering the stage have nothing thrilling on them. As the cameras sweep the audience it looks like they are staring at an exhibit at a museum, interested in an uninteresting way.

The one thing that lives up to the hype on this thing is the sound quality. Coming through in 5.1 surround it does blast through the speakers and fill the room. It’s easy to feel like you are in that crowd with all the mild clapping and cheering in 2005.

The only bonus material includes “All-New-Never-Before-Seen Acoustic Performances” which is really just 5 songs recorded in studio late last year. That’s it? Is that all they got? For a twenty dollar DVD you must have to really be in love with these guys to appreciate it, and if you do shell out the cash I hope you do love them that much.