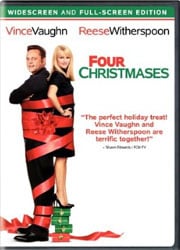 The latest Christmas out on DVD is Four Christmases with Vince Vaughn and Reese Witherspoon. I don’t even remember this coming out, but it’s out just in time for the holidays! While the movie has its flaws, it’s still a decent & funny holiday movie for adults.

Brad McVie (Vince Vaughn) and Kate (Reese Witherspoon) have been going out for three years now and have never met each other parents. There’s a pretty good reason why they never met each other’s families. Let’s just say they are a bit too much to handle, plus they have some skeletons in their own closets. So every year around the Holidays, they decide to lie to their families and go on vacation in some exotic locale. When they are at the airport, their flight gets canceled and they are interviewed on TV. All of their families see it and they are forced to spend Christmas with their divorced parents…all in one day!

I like the premise of movie, since there’s lots of opportunity of hijinks. I particularly think the first half of the movie is funnier and better. When Brad (err I mean Orlando) is at his Father’s house with his 2 annoying redneck wrestling brothers, I thought that was the highlight of the movie for me. What was even funnier to me, was what their names were (Dallas and Denver). It’s funny to me because my Dad wanted to call my twin brother and me that! Ugh, I would have hated football even more if that happened. But I felt the movie should have taken place at that location the entire movie. But then it wouldn’t be called Four Christmases then would it?

I think the acting was okay; Vince Vaughn seems to be playing the same characters each movie now. I think ever since Old School, he’s been doing the same characters. That movie, Wedding Crashers, Break-Up, Couples Retreat…he’s the same in all of them. While he may be the funniest thing about those movies, it would be nice to change things up a bit after awhile. Reese didn’t really do much, and didn’t really have any chemistry with Vince. Jon Favreau, Robert Duvall, and Tim McGraw were great though.

One of Four Christmases’ themes is dysfunctional families, which seems to be getting generic in movies lately. It would almost be funny to have some ultra-conservative, conformist family in a comedy instead. With that said, I still think Four Christmases is better than a lot of the other Christmas comedies that have been coming out lately. Movies like: Christmas with the Kranks, Deck The Halls, Fred Claus, Surviving Christmas, and Santa Claus 3. Woof, that’s a lot of bad Xmas movies!

Four Christmases will make you laugh (I think) and it’s entertaining enough to watch it again. It’s not the best thing in the world but it’s worth watching at least once. DVD buyers beware; Warner Bros skimmed out on extras and only concentrated on the Blu-Ray instead; There’s at least few extras on the Blu-Ray release. So I’d recommend getting that version if you think this is something you would like to own.