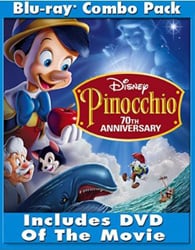 70 years ago, an animated classic was born in Pinocchio. Adapted from the stories of Carlo Collodi fairy tales back in the late 1800’s and early 1900’s, the story of Pinocchio takes place in a small village in Italy. Geppetto is a puppet maker who creates a boy Marionette and is almost done with his creation. Seeing a wishing star before bed, Geppetto asks to have this Marionette turn into a real boy so he can be his son. When the blue fairy arrives that night, a magical event takes place and transforms the puppet into a boy, but there are challenges he must face in order for the transformation to take place. Faced with decisions like bravery, honesty and loyalty, Pinocchio is still very relatable in terms of life lessons for children and adults.

The second film in the Disney franchise, after the successful Snow White and the Seven Dwarfs, Pinocchio helped continue set forth a quality standard in animation even in the industry today as we know it. One of Disney’s darker films, it’s hard to imagine some of the scenes children actually sitting through this. I know I wasn’t a fan as a kid. Disney’s earlier films always had more meaning and maturity than other children’s animation. This underlined the notion that Adults take away more from the Disney films than children, due to life lessons as is such with Pinocchio. In order to become a “real boy,” Pinocchio must resist all temptations in life. As a boy, Pinocchio has no idea what is right and wrong and along for the ride is his newly appointed conscience “Jiminy Cricket.” Jiminy Cricket, a know-it-all cricket who may be considered one of the most well known characters in the Disney franchise, is especially known for the song in the film “When You Wish upon a star.” In the film, the story takes a dark turn and shows what happens to children who don’t behave well, or leave home for a wild life. Pleasure Island, a place where children can play all day long and misbehave, swearing, smoking, rough housing and have no repercussions. Little do they know, in the end, they all turn to donkeys that are forced to work as slaves in the salt mine. Pinocchio would get freaked out by this with mister pain in the butt Jiminy, and head home to find his father, but only to notice he was missing. Geppetto was out looking for Pinocchio and eventually Pinocchio must save Geppetto, the cute little cat Figaro, and Cleo the fish.

The Pleasure Island sequence sounds pretty terrifying, I know. I was laughing at this part of the film, thinking “this is what children are supposed to watch?” With the start of World War II, Disney could have even been providing a hidden meaning behind the whole Pleasure Island sequence. It could attribute to all these young boys who are dumb and naive and run away from their responsibilities in life to have fun and not take charge in your life. This could mean they should fight in the war instead. Maybe that is my conspiracy mind at work, but considering lots of Propaganda existed around that time, it is possible. Disney was adapting the series, but certainly could have added their own spin to it.

I was disappointed to see the film was not in wide screen but that is expected since the film is 70 years old and fans should be lucky enough to get the film on Blu-ray with digitally restored audio and video. The film does look impressive for being that old, and the colors were cleaned up. Some purists believe that these were not the original colors used and were updated for a more modern look. I can’t confirm or deny this though. The audio track was in DTS 7.1 and less depending on your setup, but it sounded great through my machine. Since the film was in standard format 1:33:1 Disney enables the viewer to turn on Disney View which adds matte painting borders around the film so it does not appear to have black bars on the sides of the film, which I thought was very creative. The making of Documentary was very interesting and showed still photographs and some old movies from the making of the movie and insight was provided by film historians Leonard Maltin, J.B. Kaufman and others. Fans can for the first time also see a never before seen deleted scenes and alternate ending, with sketches from the animation department.

Disney is keeping the magic alive with all the old films of the past by releasing them on the new formats and creating new fans from each generation. It’s exciting to see these classics again, but in a new way, on high definition and I’m excited at the notion that there are more Disney Classics on the way.