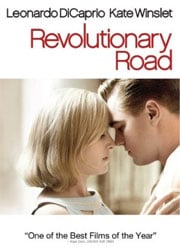 Revolutionary Road reunites Leonardo DiCaprio and Kate Winslet again and the result is excellent. The story is just a bit of a downer so if you can stomach 2 hours of a couple fighting and doing stuff they’re not supposed to be doing, than by all means see Revolutionary Road.

The film is based on a Richard Yates novel from 1961 and it’s about a young married couple living in Connecticut. Frank (Leonardo DiCaprio) and April (Kate Winslet) Wheeler move to Connecticut, close to New York City where Frank works for Knox Business Machines. He’s unhappy at his job, and stuck doing a job his Father previously did before him. April is unhappy being stuck taking care of their two children and being a generic suburban housewife. You can tell there’s something off by this couple. They say they love each other, yet constantly argued and almost kill each other. The Wheelers decide it would be better if they took a chance, and moved to Paris. Frank would be unemployed and find what he wants to do in life during the time off. April would work somewhere that supports them both. Only the plan doesn’t pan out and things get worse and worse.

I feel the movie is worth watching if you can handle all the bickering, fighting, cheating, and everything you’re not suppose to do as couples. This film should be shown to newlyweds, so they don’t end up like these two miserable sacks of shit. From the start of the film, I knew it was going to be a long 2 hours. The characters are just not likable. Frank is a slimball, and April is miserable and depressing. I think the only redeeming character in the whole film ending up being a mathematician who was in the Looney bin. That’s pretty bad when you end up liking a crazy person over the main characters. What I found funny about the movie is Frank and April are parents, yet we see the kids maybe 2 times in the whole time? Where the hell were the kids when all this stuff was happening? As much as the film was a downer, I still ended up liking this. I just don’t think Revolutionary Road is very re-watchable.

The only thing that might make this re-watchable is the performances from Leo, Kate and Michael Shannon. Just the few scenes Michael Shannon was in, he stole those scenes. He’s a quirky guy, and Michael playing a crazy person was a genius idea. The stuff that came out of his mouth was hilarious. I felt Kate Winslet gave a far better performance in this film than The Reader, which she won an Oscar for. I even felt Leonardo DiCaprio gave an excellent performance. I believe he ended up smoking a cigarette in just about every scene. There might have been one scene he didn’t. I guess that’s how everyone was back then in the 50s? I really like Sam Mendes films, with Road to Perdition being my favorite. The style to that film is somewhat similar to this one. For example, Kate Winslet looking out the big window towards the end of the film. That shot is similar to the ending RTP. Same goes with the shots from Grand Central. The sweeping Thomas Newman score might have helped bridge the two movies together perhaps? But I felt Sam Mendes did a good job, and made the movie flow best he could.

The only extras on the DVD include a commentary, deleted scenes, and a making of featurette. I believe the Blu-Ray contains more extras. The featurette was roughly around 30 minutes and was somewhat interesting. The cast and crew explain why they wanted to be in this film. Kate Winslet had to convince Leo to play the role of Frank. The project was in development for a few years before it got made. The deleted scenes were okay, but nothing that stood out. The film was long enough as it is, and I think any longer than 2 hours would have dragged the movie down.

Revolutionary Road isn’t a movie I would recommend to people but if you like depressing, dramas; this film might be just for you. Who knows, maybe you like seeing a couple’s marriage fall apart right in front of your eyes? The acting was the highlight for me, especially Michael Shannon’s performance. This isn’t a bad movie, but it’s one I wouldn’t watch anytime soon.