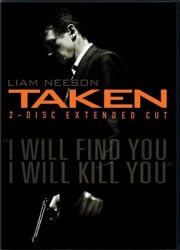 The surprise hit of 2009 is out on DVD and Blu-Ray in a multitude of editions. Taken is a movie I wanted to see in theaters but just never got around to it (like usual). I’ve heard lots of good things about Taken and decided to check it out on DVD. I thought the movie was a great non-stop action flick that deserves a sequel!

Liam Neeson plays Bryan Mills, an ex-CIA agent who “prevented” things from happening. He retired so he could spend more time with his 17 year old daughter Kim (Maggie Grace), who lives with his ex-wife Lenore (Famke Janssen). Bryan finds out that his daughter wants to go to Paris with her friend for the summer. At first he says no because he knows how the real world is, but eventually says yes. Well he should have stuck to his guns, because Kim and her friend end up getting kidnapped and put into an Albanian slave trade. There are several instances where his daughter probably could have prevented this from happening but what can I say, 17 year olds are idiots. But anyway, Bryan races against time to save his daughter, and stop the men who did this. After the 96 hours, they may never know what happened to her.

I was surprised that the film was such a success at the box office. I guess everyone wanted to see Liam Neeson kicking ass, and just see a good old-fashion revenge story. Since Luc Besson wrote and produced this, Taken is very similar to movies like The Bourne and Transporter trilogies. Hey, I’ll watch 3 movies of Liam Neeson as this character. The guy is almost 60 and still kicking ass, and it still looks believable. The movie is only an hour and half and it breezes by. The last hour is just Liam Neeson blowing guys away, and it’s just a solid action flick. There’s one torture scene in the flick that will make you cringe. Obviously some things are unbelievable but not as ridiculous as the Transporter movies. At one point in the film, I thought he was going to drive his car onto a boat but thankfully he didn’t do that. If it was Jason Statham, he would have. I’m glad they didn’t go that route though. The only really negative I have about this movie was Maggie Grace, who clearly doesn’t look like she’s 17. She’s 25 now, and even with brown hair she looks old. But other than that, I really had no problems with the movie.

The DVD has only a few standard bonus features on it. There is both a theatrical cut of the movie and an uncut edition. Of course I watched the uncut edition, but not sure what was added into the movie. I’m assuming just more violence and stuff like that. There’s a making of featurette that contains interviews and behind the scenes footage. Most of the interviews with director Pierre Morel are in French so just FYI. There’s footage from the premiere, which is sad to see because Liam Neeson is with his late wife Natasha Richardson. Other extras include shot by shot comparisons and a digital copy of the movie.

Taken may not be the most original action movie out there, but it’s certainly an entertaining flick that felt like the Bourne and Transporter trilogies. I’m hoping when they make the next movie, Liam Neeson returns and that movie is even better than this one. Check this film out if you like action movies.