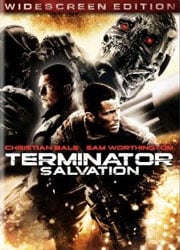 The Terminator franchise continues on without Arnold, this time starring Christian Bale and Sam Worthington. McG takes the reins from James Cameron and company and does a decent job with the material. Is this the best thing in the world? No, it’s not but it’s entertaining enough not to throw something at the TV.

Terminator Salvation takes place years later after Judgment Day. John Connor (Christian Bale) is moving up the ranks of the Resistance, battling SkyNet and the machines he was destine to fight. While this is all happening, executed Death Row inmate Marcus Wright (Sam Worthington) awakes in the future and is alive & well. Last thing he remembers is agreeing to a Cyberdyne Systems lady to do “research” on his body after he’s executed. He doesn’t know what happened and ventures into town. He gets rescued from a Terminator by a young Kyle Reese (Anton Yelchin), John Connor’s Father and an important Resistance fighter who rescues Sarah Connor back in the, um future? After hearing a radio message from Connor, they try to meet up with The Resistance and John Connor. But their plans get interrupted when Kyle and his companion Star, along with another group of people get captured by SkyNet. Marcus eventually meets up with a down pilot Blair (Moon Bloodgood) who brings him to John Connor. In the long run, John and Marcus make a pact to infiltrate SkyNet’s headquarters and bring them down, along with rescuing Kyle Reese and the rest of the prisoners.

I was skeptical going into this movie. I thought it was going to suck but I ended up liking Terminator Salvation. It has lots of action; the graphics aren’t bad and seems to fit with the other movies. The cancelled TV series didn’t have enough action and got too boring, which is why it turned a lot of people off. This movie still feels different from everything else. Not sure what it is though. Could it be that they are finally in the future, and the Terminators aren’t being sent back in time to rescue John or Sarah. But something feels left out. With that said, I still had a blast watching the film and think it got too much bad press; either from Christian Bale’s understandable blow-up on the set or just bad reviews. Sure, the movie isn’t perfect and it’s all over the place at times but I still think it’s better than most action films that have been coming out lately.

When it comes to the acting of Terminator Salvation, Christian Bale isn’t the first person I think of. It’s Sam Worthington, who will be the next big action star when Avatar and Clash of the Titans remake come out. Just watching him in the movie felt fresh to me. Someone we haven’t really seen before and someone who stole the spotlight from Christian Bale. Only problem is, is there anyway his character can come back if they decide to make a sequel to this? But then again, Arnold kept finding ways to come back in the sequels. This movie felt more like the story of Marcus Wright than it did John Connor. John Connor felt like a backdrop, which could be the film’s biggest flaw. While it’s cool to follow the storyline of Marcus Wright, we really want to know about John Connor. I think the script should have focused on that more than Marcus.

The other actors like Anton Yelchin, Moon Bloodgood, and Bryce Dallas Howard were good but underused I thought. To me, it’s weird seeing Anton speak normal and not with a Russian accent like he did in Star Trek. There’s not much to say about Common, who played the right hand man and just grunted it seemed. As far as the direction, it was okay. Could have been better, and it seems like McG and others had their hands full with trying to make this movie. I guess that just from watching it, because it’s all over the place at times. The ending is a bit lackluster and uneventful I think. I would have done things differently.

If you plan on getting the DVD, I would hold off until a “director’s cut” or “extended cut” comes out because there are no extras on here. I think Warner Bros is concentrating solely on Blu-Ray now since that version has a director’s cut (additional 3 minutes added to the movie) and tons of extras. Why leave the DVD viewers hanging? DVD isn’t like VHS where it’s gonna be dead, it’s digital video and looks great still. I like that studios are still releasing both digital formats but WB seems to be the one that’s ignoring DVD owners now.

Overall, Terminator Salvation is a flawed movie but I still thought it was entertaining. Sam Worthington is the highlight for me, and probably the best thing about the movie. If you decide to buy this movie on video, get it on Blu-Ray if you can.